THE USDA has reduced its estimate for Australia’s new-crop wheat production to 18.5 million tonnes (Mt) in its October World Agricultural Supply and Demand Estimates Report (WASDE) released overnight, down 1.5Mt from 20Mt forecast in September. 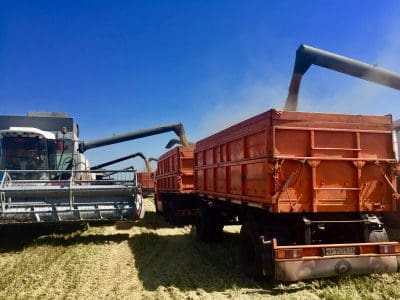 This is below the most recent ABARES forecast released last month of 19.1Mt, but is above 16.4Mt estimated by INTL FCStone in its October figures released this week.

USDA said its estimate puts Australian production at its smallest since 2007-08, with continued dry conditions and possible frost damage behind the latest cut to its forecast.

The USDA has also cut projected global 2018-19 wheat trade, almost all on reduced Australian exports, which it has revised down by 1Mt from last month to 13Mt.

Australia’s ending stocks have also taken a hit in the latest WASDE, down to 3.35Mt from 3.95Mt forecast in last month’s report, while beginning stocks are unchanged at 5.4Mt.

In accompanying commentary, the USDA’s Foreign Agricultural Service (FAS) said Australian wheat is largely priced out of international markets as some tonnage is being diverted from export channels for domestic use.

During the southern hemisphere’s peak export months of December to March, FAS said Argentina was likely to seek out additional markets in Africa and Asia, partially filling in for reduced Australian exports.

This could be a major opportunity for U.S. wheat to fill demand in Asian markets.

The WASDE has also cut Russia’s estimated wheat production, down 1Mt to 70Mt because of lower-than-expected yields in some spring wheat areas.

Combined with the reduced production forecast for Australia, this has cut USDA’s estimate for global 2018-19 wheat supplies, and an expected reduction in imports from Bangladesh, Azerbaijan, and Nigeria have accounted for much of the downward revision in world consumption.

US hit by China tariff

The FAS report said the country which represents the largest drop in US commitments from last year is China, due to its 25pc duty levied against US wheat, and shipments to China are unlikely to pick up unless the tariff is removed. 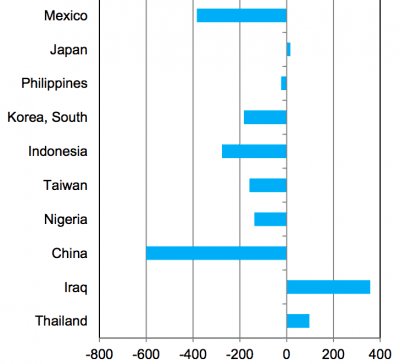 The next largest drop is exports to Mexico, which have been affected by stiff competition from Canada and Russia in recent months.

FAS said Russia’s torrid pace of exports in recent months has also taken a bite out of US exports to several Asian countries, particularly Indonesia.

On the other hand, wheat shipments to Iraq are off to a fast start this year and could provide a further boost to US exports throughout the year.

The outlook for 2018-19 US wheat this month is larger supplies, reduced domestic use, unchanged exports, and higher ending stocks.

The forecast for US wheat exports is unchanged at 28Mt (1025M bushels), with the white wheat component revised up, and the Hard Red Winter component lowered.

US projected ending stocks have been revised up to 26Mt (956M bushels), 13pc below last year’s figure.