USDA’s latest monthly WASDE has cut Australia’s projected exports to 10.5 million tonnes (Mt), down 1Mt from the November estimate, and 2.5Mt below the October figure.

On production, USDA at 17Mt in the latest WASDE, is down from 17.5Mt in November, and is now in line with ABARES’ equivalent forecast released last week.

Partially compensating global trade for Australia’s decline, USDA has boosted its forecast of Russia’s exports by 1.5Mt to 31.5Mt, and has adjusted some previous year domestic feed usage.

Now is the time of year when all the northern hemisphere wheat crops have finished harvest, and the main southern-hemisphere harvests are under way.

Argentina would be the last of the major exporters to harvest, and traders are hoping its record 19.5Mt wheat harvest can be completed in fine weather.

USDA reported that exports from Russia and other Black Sea suppliers would continue to displace EU and US exports in several markets in the first half of 2018/19, but were expected to be less competitive in the second half.

Dry conditions have lowered production forecasts for Thailand and Australia in 2018/19 by 500,000t and 300,000t respectively, which USDA said would lead to similar reductions in world trade. 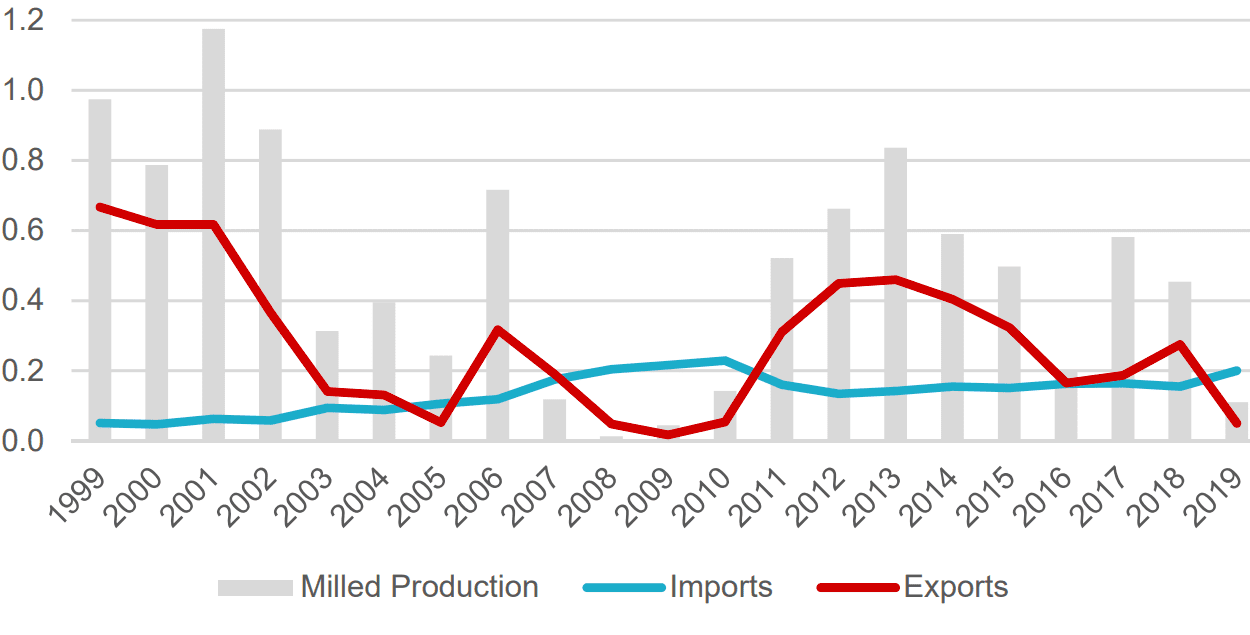 Following severe dry conditions at planting, Australia is set to produce just over 100,000t of  milled rice from its early 2019 harvest.

As a result, Australia is forecast to see exports plummet by more than 80pc to 50,000t, and is forecast to become a net importer of rice for only the fifth time on record.

Australia’s imports are largely Asian-supplied long-grain, and are expected to edge up slightly and have a minor global market effect.

However, this development will have a critical impact in the medium-grain market.

Australia is typically a key supplier to Asia, Oceania, and the Mediterranean region.

The US is traditionally a major exporter of medium-grain rice, and is likely to compensate for some of the Australian deficit.

In addition, China has also begun to expand its share of medium-grain markets at very competitive prices.

On the upside, rice production forecasts in Nigeria and Nepal have been raised by 1Mt and 200,000t respectively.