Australia’s June wheat exports at 1.35Mt down 6pc from May

AUSTRALIA’S wheat exports in June at 1.35 million tonnes (Mt) were down 6 per cent from the May figure of 1.44Mt, according to the latest export data from the Australian Bureau of Statistics (ABS). 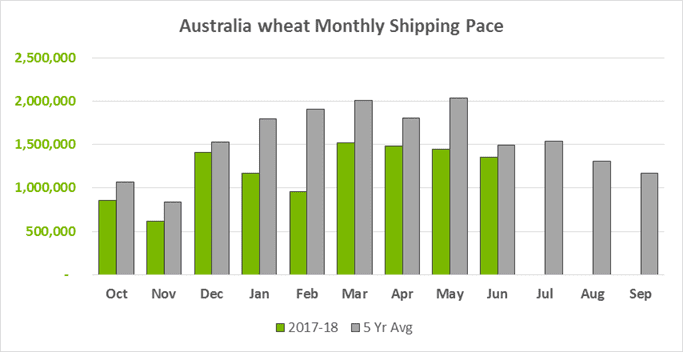 The drop in total bulk and containerised shipments of Australian wheat has not shown signs of limitation caused by a string of cargoes making their way from the export-focused states of Western Australia and South Australia to drought-hit eastern states.

Market Check head of strategy, Nick Crundall, said the June total was only slightly down on the five-year average for June of 1.49Mt.

“It illustrates that exports are running fairly high relative to our production this season,” Mr Crundall said.

Indonesia on 380,482t bought the most grain it has in 10 months, which Mr Crundall said reflected the appeal of Australian wheat in the face of a rally in Black Sea values, and continued  Indonesia’s run as Australia’s largest customer.

Holding its number two spot in June was The Philippines, which took 264,574t in of Australian wheat, down from 314,600t in May.

“Unsurprisingly, most of the heavy lifting was done in Western Australia, as the east coast is working to cut off exports and preserve remaining inventories to satisfy domestic demand.

“In terms of new-crop exports, what we’ll have available to the export channel is very much dependent on how spring weather plays out.

“There is little doubt though that our exports will be the lowest in more than 10 years, and much lower than the current USDA estimate.”

This estimate is widely expected to be cut in USDA’s August World Agricultural Supply and Demand Estimates (WASDE) report due out on Friday.

The July WASDE report reduced the forecast for Australia’s new-crop exports to 16Mt from a 22Mt production, down from the June estimate of 17Mt of exports from 24Mt produced.

Figure 3: ABS data for Australia’s containerised wheat shipments for April, May and June 2018.