AUSTRALIA’S March chickpea exports totaled 25,364 tonnes, down 46 per cent from the February figure of 46,866t, according to the latest data from the Australian Bureau of Statistics (ABS). 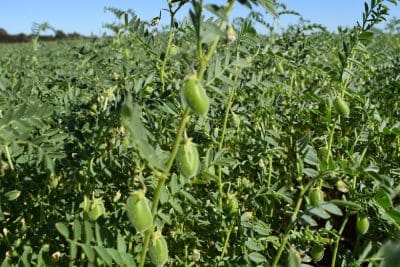 Bangladesh has continued its trend of recent months as Australia’s only bulk chickpea destination while India, traditionally Australia’s biggest chickpea markets, keeps its door closed as it chews through its ample domestic supplies.

In its weekly market report released on Thursday, Narrabri brokerage AgVantage Commodities said the chickpeas trade had shown some movement.

“Demand is still low across the globe, especially now during Ramadan, though with a slight drop in the Australian dollar, we have seen bids eventuate,” the report said.

“It isn’t exciting news, but at least there is some activity in the market.”

Northern New South Wales and the southern half of Queensland are Australia’s major desi chickpea-growing areas, and some planting taken place, with current-crop chickpeas delivered Narrabri trading at around $685 per tonne, and $40/t less for peas harvested in 2017.

New-crop bids are hard to find as production prospects are mixed in southern Queensland and northern NSW, and very little chickpea area has been planted to date.