AUSTRALIA exported 43,856 tonnes of chickpeas in May, down 37 per cent from the April figure of 69,103t, according to the latest data available from the Australian Bureau of Statistics (ABS). 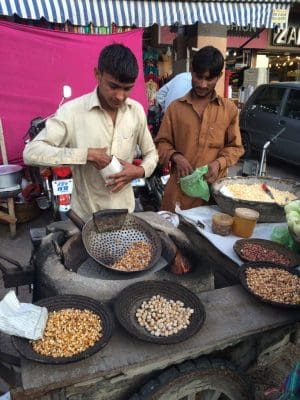 The drop reflects a rundown on Australia’s export surplus, and a continued absence of demand from what has traditionally been its biggest market, India.

In line with trade expectations, Pakistan was Australia’s biggest chickpea importer in May.

COFCO chickpea trader, Rob Brealey, said Pakistan was buying Australian chickpeas as needed to cover the domestic shortfall in its own production, and this demand was absorbing much of the available tonnage as the market moved towards the new-crop year.

While last year’s Australian chickpea crop was around half the size of the record 2016 production, Mr Brealey said unpriced 2017 tonnage was still making its way to market, indicating yields and area may have been greater than estimated at harvest.

Bangladesh is expected to show minimal interest in Australian chickpeas for the remainder of the year, and Mr Brealey said a rise in the domestic price of Indian chickpeas still had its market “hundreds of dollars” below import parity.

Australian chickpeas for prompt delivery to Darling Downs packers are currently trading at below $630 per tonne.

“The market’s off a bit at the moment, and it’s been moving around on changes in our weather conditions, and what Pakistan is buying.”

All of Australia’s 2018 chickpea area is now believed to be planted, and has better yield prospects than other winter crops because the seed is sown deep to access subsoil moisture.

According to the most recent ABARES forecast, the 2018 chickpea crop is expected to cover 528,000 hectares, down 53pc from the 2017 area which produced around 1.1 million tonnes.

Table 1: ABS chickpea exports for March, April and May 2018.