OPPORTUNITIES presented by Southeast Asia’s expanding middle class and its appetite for bread, biscuits and cake can be capitalised upon by Australia’s wheat industry if it works collectively to combat competition from Ukraine and Russia. 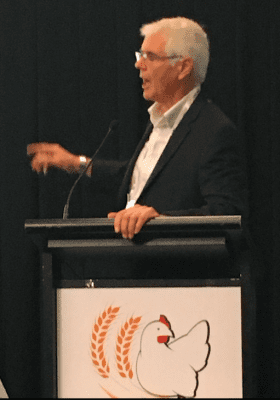 That was the message from Australian Export Grains Innovation Centre general manager research and technical services, Ken Quail, in his address to the PIX AMC 2018 conference at Broadbeach last week.

“This is something our domestic industry does need to take an interest in, because we are feeding back messages about our export markets to our wheat breeders, our classification system, and the supply chain,” Dr Quail said.

“It’s important to get involved in that dialogue.”

“Anything we do about focusing on grain quality for our export markets has a flow-on to our domestic industry.

Between 2001 and 2005, Southeast Asia accounted for 28 per cent of Australian wheat exports, behind the Middle East on 34pc.

In the five years to 2015, sales to Southeast Asia have grown to 44pc, while the Middle East’s market share has contracted to 23pc.

All combined Asian markets accounted for around two thirds of Australia’s wheat exports.

“Of our leading markets in Asia, Indonesia is absolutely dominant; it’s a stand-out market.”

“Even compared to Australia’s domestic consumption of a little over 2 million tonnes (Mt) for flour milling, Indonesia has become our number one market.”

Australia in the five years to 2015 had supplied Indonesia with around 4Mt per annum of wheat, approximately half its total market demand, while other suppliers accounted for around 3.8Mt.

The combination of higher per capita wheat consumption and population increase is forecast to lift Indonesia’s imported wheat demand by to 12.8Mt by 2025, up from an annual average of 7.8Mt in the five years to 2015.

“We can see that there’s enormous opportunity for growth in one of our nearest neighbours,” Dr Quail said.

Dr Quail said noodles remained an important user of Australian wheat, and AEGIC was looking at changes in those markets, as well as demand from baking.

“Noodles are our strength, but we also want to look at opportunities in bread-making and soft-wheat markets.”

“End-product performance drives the value of our grain exports.”

AEGIC has been working with many Asian markets including Vietnam, Australia’s second-biggest wheat market, and Thailand to understand what their end-users wanted from Australian wheat.

Dr Quail said AEGIC was working on a detailed study to forecast requirements across Asia to 2030 to allow industry to focus on targets and to determine the focus of research funds.