DEMAND for Australia’s current-crop durum wheat has created a bright spot in the otherwise lacklustre cereal complex, with Italy and North Africa expected to absorb the 2016-17 export surplus when the last bulk shipment sails in July. 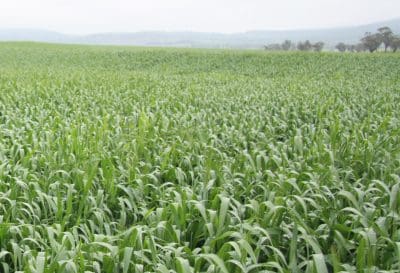 A crop of Lillaroi durum at Mullaley on the Liverpool Plains of NSW. It yielded 6t/ha in the 2016 harvest.

“This year, Australian durum is of much better quality than what is around from Canada, where early snow and rain on a huge crop meant that some area didn’t even get harvested,” he said.

“The high vitreous count of 90-100 per cent for Australian compares with 55-60pc for the Canadian; it’s not every year our durum is significantly better than Canada’s, but this year ours is very good.”

In February, ADC shipped a 40,000-tonne cargo of durum from Newcastle to Italy, and Mr Howard believes the company’s second such cargo of 50,000t booked for July will all but exhaust Australia’s 2016-17 export surplus.

“At most, we will see 250,000t shipped from Australia, with three or four cargoes in total to Italy, and the rest to North Africa.”

Mr Howard said downgraded and discounted durum from Canada had all but locked Australia out of the containerised market in the Middle East.

“Australian durum is $35-$40/t dearer than Canadian, so it was hard to make boxes work this year.”

Mr Howard said Australia’s 2016 durum crops were not without quality problems in patches, with black tip being a side-effect of the long and wet spring in key growing areas in northern NSW and southern Queensland.

North west NSW grain grower and regular durum producer, Ross Durham, Mullaley, said the upside to prices in the world was likely to keep durum on his list of preferred crops.

However, catching spikes in the market had proved difficult in the past two harvests for later-harvesting areas like his on the Liverpool Plains, and pools could be hard to catch.

“Prices we can access might be $50-$80/t less than they were at the start of harvest, and it can be risky to forward sell at those better prices if we can’t be sure of making DR1 or DR2,” Mr Durham said.

However, with world durum production historically at around 35-40Mt, and only 5-8Mt traded, Mr Durham said production glitches elsewhere often worked in Australia’s favour, as was the case with Canada’s 2016 crop.

“That’s the risk we run. We roll the dice with it a bit, but I believe our soil types are well suited to durum, and high grades have a lot of potential upside based on what happens in other key producing areas. Our niche market is our quality,” he said.

According to IKON Commodities analayst, Alistair L’Estrange, new-crop durum values look to be more promising as global planting areas are reduced across Europe, Canada and the US.

However, a breakout in prices is seen as unlikely, with the International Grains Council forecasting global durum ending stocks to total 10.7Mmt, 41pc above the five-year average.

In May, CANSTAT pegged durum stocks at 4.1Mmt, well below the trade’s expectations of 5.2Mmt, with much of the residual durum crop pegged for use as feed due to quality issues created by last year’s troubled harvest

“We would expect Australian 2017-18 durum area to remain constant, given the premium it trades at over standard wheat, and despite the expected fall in total wheat area,” Mr L’Estrange said.

According to GRDC Durum GrowNotes, South Australia produces 40-50pc of Australian durum, with the balance coming from northern NSW and southern Queensland.

In a typical year, Australia exports 60-70pc of its durum production; the balance is consumed locally by manufacturers include Adelaide’s San Remo.