WORLD wheat prices are down about 15 per cent from this time last year, which is helping wheat to buy its way into feed rations, according to the September report from Agricultural Market Information Systems (AMIS). 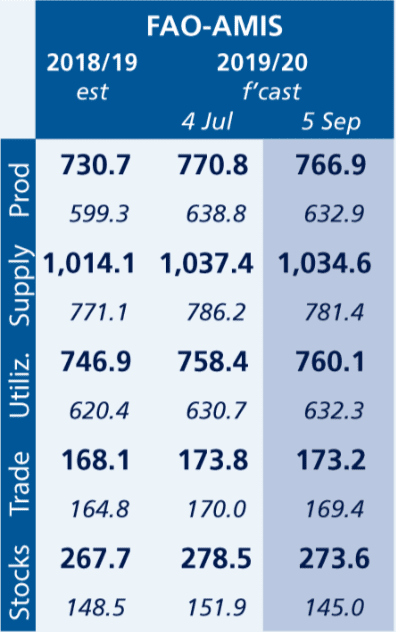 New crop world wheat production is forecast record and consumption, especially feed, is forecast stronger. Million tonnes. The numerals in bold are world totals, in italics are world totals but not including China. Source: AMIS (Click on image to expand).

Issued on Friday, the report forecasts world wheat production at 767 million tonnes (Mt), down from 771Mt forecast last month but it says the 2019/20 crop is still forecast to be a record, and well above the 731Mt produced in 2018/19.

Trade in 2019/20 would be 3pc higher than in 2018/19 supported by large export availabilities and strong import demand in Africa and Asia.

Egypt confirmed on 3 July in its notification to the WTO, the maintenance of a moisture content of 13.5 per cent in wheat imports (triticum aestivum) until April 2020.

The Ministry of Agriculture in the Russian Federation on 1 July renewed the extension of the duty-free export regime applicable to wheat until 1 July 2021. The export duty had been suspended between September 2016 and June 2019.

On 7 August, Saudi Arabia and the United Arab Emirates announced a joint food-aid package to Sudan that included 540,000t of wheat to cover basic food needs for a three-month period.

Saudi Arabia’s Grains Organization (SAGO) on 8 August relaxed its threshold under its zero-tolerance policy related to insect-damage of wheat imports to 0.5pc.

The measure is expected to increase imports from the Black Sea.

On 26 August, SAGO announced it would import 10pc of the country’s annual wheat consumption requirements from Saudi-controlled firms based abroad.

The firms must be registered at the Ministry of Environment, Water and Agriculture.

In the northern hemisphere, the winter-wheat harvest is ending and the harvest of spring wheat has started under mostly favourable conditions.

Canada’s spring-wheat harvest has begun under mixed conditions across the prairies due to variable weather throughout the season, while harvest of winter wheat is continuing under generally favourable conditions.

In the southern hemisphere, some dry areas in western Argentina and eastern Australia are the only ones of concern.

Severe rainfall deficiencies persist across much of New South Wales and Queensland, while average August rainfall across much of Victoria, Western Australia and South Australia is likely to have been enough to support continued crop development in these states.

The EU winter-wheat harvest is wrapping up under generally favourable conditions, having avoided most impacts from the recent heatwave.

In Kazakhstan, conditions are generally favourable for spring wheat, but dry conditions in Kostanay are expected to affect final yields.

Ukraine’s harvest is ending under favourable to exceptional conditions, with yields reported to be above last season’s.

AMIS said the 2019/20 marketing year was likely to feature stiff competition among exporters, given the prospect of high export availability relative to anticipated demand in maize, rice, soybeans and wheat, according to its September report released on Friday.

The September report said lower soybean output is unlikely to become a concern, as overall supplies remained adequate, especially given the dampening impact of African Swine Fever on feed demand in China.