CHINA is buying at least half of Australia’s near-term barley exports, which are keeping shipments away from Middle Eastern markets where lower-priced European origins are dominating. 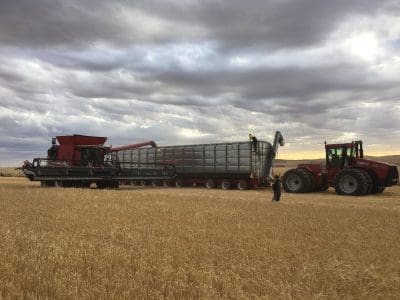 According to available shipping schedules, Australia is booked to export 537,000 tonnes of bulk barley, with 234,000t to go to China, and 157,000t slotted for Asian ports outside China.

A further 146,000t is booked to load for unspecified destinations, and trade sources have said these are likely to be in China.

In CBH Group’s latest West Australian harvest report, the company has said interest in feed barley to China has continued, with grower selling being evident in the A$250s per tonne FIS.

“The Middle East market this season looks like it will be dominated by Europe and the Black Sea as Australian barley continues to go to China,” the report said.

Lachstock said it was unlikely any of this would be filled out of Australia, given the strong demand for comparable grades the market had seen from China.

Trade sources report barley harvested in Victoria and central and southern NSW to date had generally been of good quality, but was now under threat of downgrading as a rain-bearing front moved into south-eastern Australia.

Grain Producers Australia chairman and Victorian barley grower, Andrew Weidemann, said barley still in the paddock would likely lose some of its brightness and grain weight if the rain was significant, and followed by damp conditions.

“Generally, the first rain isn’t a problem, but test weights and staining are going to be an issue if we get as much rain as we think we are going to,” Mr Weidemann said.

Harvest has already stopped in parts of the southern Australian grainbelt following rain and some hail, with the latest fall battering crops in Victoria’s Wimmera region yesterday.

“Everybody’s working around the clock to get harvest off as best they can but this is frustrating for growers who have had frost and now hail.”

Mr Weidemann said anyone with malting barley could expect a good price for it.

“You’d have to see the premium for it over feed widen because there’s not much of it around this year — it’s been more canola and lentils.”

Trade sources say Victorian and NSW barley-producing areas are likely to be supplying domestic rather than export markets.

This is in the wake of a tough growing season in northern NSW and Queensland which has slashed the amount of feed and malting barley available to domestic end users.

One Victorian trader said he was expecting a widening of the spread between malting and feed as domestic maltsters particularly chased down the best-quality barley available.

“It hasn’t changed a hell of a lot yet, but it will if Victoria gets 100 millimetres of rain on 1 December like some forecasters are saying it will.”

“There’s not much demand for export malt; it’s more of a domestic market at the moment.

“The maltsters have bought old-crop until its germination period runs out in about April next year.”

The trader said a shortage of malting barley might see buyers having to look at better-quality feed grades to fit their processing requirement.

“Quite often in years like this, end-users will change their specs because they have to.”

The barley harvest in Australia’s major exporting states, Western Australia and South Australia, is close to halfway through.

Queensland’s drought-depleted harvest is well and truly over, and in NSW, harvest focus has moved to the state’s southern half, where most of the barley has been harvested.

In Victoria, many growers have concentrated their early harvest attention on canola, lentils and wheat at the expense of barley. Therefore, less than one-third of Victoria’s barley crop is estimated to be in the bin.