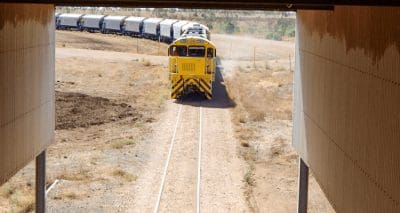 The first Watco train to operate for GrainCorp in Central Queensland arrives at Mt McLaren to load chickpeas. Photo: Watco

THE FIRST cargo of new-crop Australian chickpeas is set to load in the coming week to kick off a shipping program which will place around 95,000 tonnes of Central Queensland (CQ) desis into Bangladesh in time for the start of Ramadan in April.

The vessel will load at the Port of Mackay, which last week received chickpeas carried by Watco Australia’s first GrainCorp train.

Loaded at GrainCorp’s Mt McLaren site between Clermont and Moranbah on December 2, the train comprised two locomotives and 42 wagons, and discharged in Mackay the following day.

It was the first rail movement to come out of a 10-year rail haulage contract between eastern Australia’s largest bulk handler, GrainCorp, and Watco Australia. 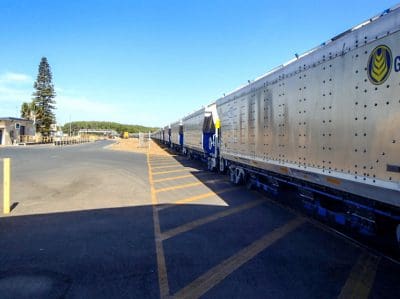 The new Watco wagons arrive at the Port of Mackay carrying chickpeas for export to Bangladesh. Photo: Watco

The locomotives are being engineered and built at NRE’s facility in Mt Vernon, Illinois, and the first are yet to arrive in Queensland.

“GrainCorp has been an integral part of our planning process and should be one of our top five customers worldwide once fully operational.”

Grain Central understands accumulators using GrainCorp’s up-country storages in CQ will be able to hire the Watco rolling stock to move grain to the GrainCorp export terminal in Mackay and possibly Gladstone.

GrainCorp is also an exporter, and is one of four companies due to ship chickpeas to Bangladesh between now and March.