A CARGO of faba beans on its way from Port Adelaide to Egypt is a further sign that confidence is returning to Australia’s key faba market. 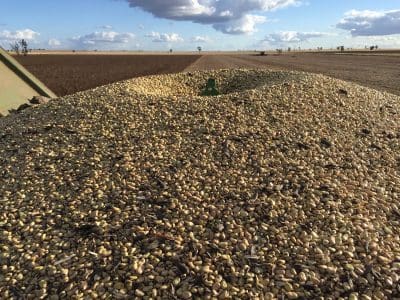 The Glencore cargo of 30,000 tonnes is believed to be the first bulk shipment of fabas for this year.  The previous bulk shipment was last September also from South Australia.

“The faba bean market has stabilised after a rough time,” Mr Wilson said.

“That’s good news for faba beans in the longer term, and we’re certainly in a better place than we were 12 or 18 months ago.”

Egypt has traditionally taken two to three bulk vessels each year, mostly from South Australia.  Trade sources have said selling into Egypt has always brought with it counterparty risk, but was exacerbated when the Egyptian currency was floated in 2016.

“As a business, we’ve taken on the financial risk in order to maximise value for growers and insulate them from market uncertainties,” Glencore pulses trader, Mostyn Gregg, said.

“The container market has been active enough for growers who have been willing to participate at current levels,” Mr Vater said.

Mr Wilson said China had in place a non-tariff trade barrier which prevented significant quantities of Australian faba beans from entering this market.

He said Pulse Australia and the Grains Industry Market Access Forum (GIMAF) had been working with the Federal Government negotiating with Chinese authorities to open better trade access for Australian faba beans for import into China.

“Last week with the Prime Minister and the Deputy Prime Minister in Toowoomba, I raised the issue of getting faba beans into China. That would give beans a new dimension.”

Rural Directions executive director, Chris Heinjus, believed planted area may shift a little in favour of faba beans this year.  He said grower consultations with agronomists in coming weeks would help to determine plantings for the 2018 crop.

“We could expect to see faba plantings up and lentils down a little,” Mr Heinjus said.

Mr Wilson said faba bean plantings would depend on the amount and timing of opening rain.

“Depending on the moisture situation, I think faba beans still represent a reasonable option for farmers.”