GrainGrowers’ trade and economics manager Luke Mathews is currently in India as part of the Austrade delegation, along with Australian exporters, industry leaders and key Australian Government officials.

“India’s growing import demand for grains, oilseeds and pulses will no doubt benefit the Australian industry for many years to come,” Mr Mathews said.

“Total Indian grain consumption has averaged 232.1 million tonnes (Mt) over the past five years, and has grown at an average rate of 3.8Mt per annum over the past decade.

“India has remained largely self-sufficient in grain production in the past five years with production averaging 240.5Mt per year. However, increasing rates of domestic demand growth driven by increasing population and changing diets – combined with slowing rates of production growth – will result in India emerging as a key import market for grains, oilseeds and pulses in the future.

“The development of a more intensive livestock industry in coming years is also expected to increase India’s need for imports.” 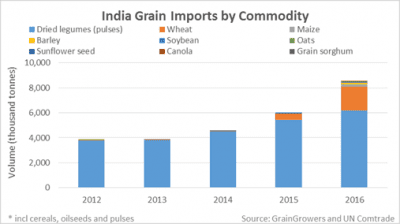 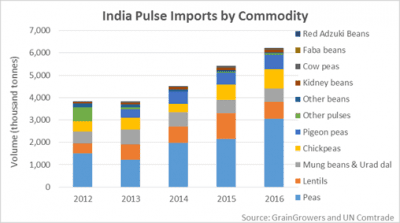 “Historically, India has been a sporadic importer of wheat due to local seasonally-induced production shortages. However, India is now shaping up as a structural net-importer of wheat.

“After exporting wheat for much of the past decade, over the past two seasons India has imported nearly 10Mt of wheat. Australia has emerged as a significant beneficiary of India’s wheat import demand.

Mr Mathews said India’s grain and food industry was subject to a high degree of policy intervention, with partly-opposing objectives of:

Supporting efforts to improve understanding of Indian market dynamics, GrainGrowers has released a report on the growing importance of the Indian market for the Australian grains industry.