EXPORTS of Australian feed barley have dwindled to 6372 tonnes in August, compared with 129,504t in July, while shipments of malting barley have more than doubled, according to the latest figures from the Australian Bureau of Statistics (ABS). 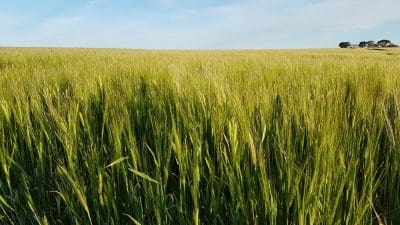 A barley crop on South Australia’s Yorke Peninsula, where yield prospects are among the best to found this year in Australia. Photo: James Preuss, Concierge Genetics

While China remains out of the market for Australian feed barley, it ramped up its demand for malting in the August-shipment slot, and purchased 139,697t from Australia, more than double the July figure.

Shipping stems indicate most or all of the barley hatches to be shipped out of Western Australia this month are bound for eastern-Australian ports to satisfy domestic demand as the market waits for new-crop to become available from the harvest now under way.

According to the latest Lachstock Consulting Vessel Activity Report, WA ports will load 40,000t of barley in total this month for discharge in Brisbane, Newcastle and Port Kembla.

China was the only volume buyer of August-shipment Australian sorghum, taking 21,513t of the total 22,670t shipped.