Fodder exports on the rise

AUSTRALIAN fodder exports totalled 74,831 tonnes for the month of September, bringing the 2016 nine-month, year-to-date export volume total to 744,595t, according to the Australian Bureau of Agricultural and Resource Economics and Sciences (ABARES). 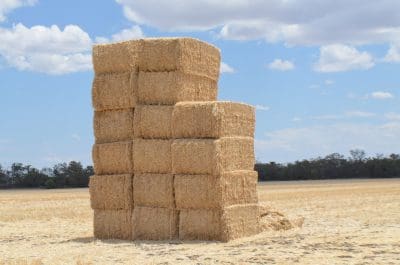 Fodder exports in September were valued at A$29.3 million.

On a value basis, September 2016 Australian fodder exports were valued at A$29.3 million.

Japan remains Australia’s number one customer for fodder exports, taking nearly 40,000t in September, or 53 per cent of the total exports for the month.

On a nine-month, year-to-date basis, Japan’s share of total Australian fodder exports is only marginally less at 48pc.

China, the Republic of Korea and Taiwan also continue as strong export destinations for Australian fodder.

Despite the difficult start to the 2016 hay production season throughout much of the country, Australian exporters are confident of continued demand for Australia’s fodder products, citing quality and reliability as key determinants of the ongoing strength of the sector.