WHEAT PRICES in most major exporting countries fell during the month of June, mainly influenced by northern-hemisphere harvest pressure and expectations of a record high global wheat supply, according to the July USDA Foreign Agricultural Service report. 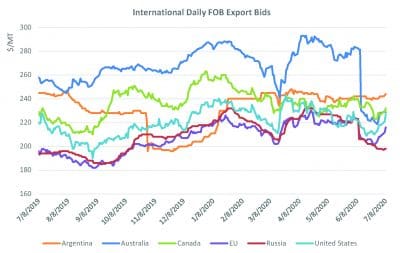 Russian prices in June were pressured by the approaching harvest amid relatively favourable conditions to date, while EU prices declined, despite lingering concerns over dryness in some European countries.

However, EU and Russian wheat prices have rebounded in recent days on expectations of smaller crops for both origins, and production prospects for Morocco and the US have also been reduced this month.

Canada’s prices also declined on seasonal pressure and expectations for a large crop, while US prices moved lower with its winter-wheat harvest now past halfway, but losses were limited by market reactions to the USDA’s national crop area report.

The exception has been Argentina, where values edged higher on seasonally tightening supplies.

The global consumption forecast has been lowered, mainly on reduced feed and residual use in the EU. Global trade is also down as reduced shipments from the EU more than offset higher exports for Australia.

Global production in the 2019-20 marketing year now nearing its end is virtually unchanged this month, while global consumption is lowered with reduced feed and residual use in the US and the EU.

Global trade is up with slightly larger imports for China, the EU and Turkey, and exports have been raised for the Canada, EU and  Russia.

The Philippines is the second-largest market for US wheat, and with imports of around 7 million tonnes (Mt) per annum, and with Algeria, Brazil and Turkey, jostles for the place of world’s third-largest importer behind Egypt and Indonesia. 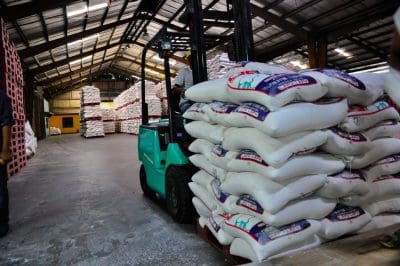 The Philippines’ demand for flour and milling wheat has nearly doubled in the past decade as expanding population and increased per-capita income has contributed to a surge in consumption of wheat-based products, mainly bread and noodles.

The Philippines’ milling industry purchases much of its milling wheat from the US for its quality and consistency, and also imports flour, largely from Turkey.

This competes with The Philippines’ domestic milling industry, and indirectly with wheat imported from origins including the US and Australia.

Economic incentives created by Turkey’s Inward Processing Regime (IPR) have made Turkey one of the world’s largest flour exporters, and in 2011-12, its sales to The Philippines almost doubled.

The surge in Turkish flour imports contributed to The Philippines reducing its purchasing of US wheat in 2012-13 by close to 20pc.

The Philippines’ imports of milling wheat have grown substantially with the tariff in place, and the domestic milling industry has asked the PTC to extend the tariff for five years.

Last month, the PTC agreed to review this request, with duties to remain in force pending the outcome of the review.

Without the extension, Turkish flour would likely re-enter the market and compete against the domestic milling industry, creating challenges for US wheat exports once again. Figure 1: The Philippines’ imports of flour and US wheat in million tonnes. Source: USDA

US opportunity in Brazil

Brazil’s recently opened and expanded tariff-rate quota (TRQ), coupled with a seasonal slowdown in Argentine shipments over the next few months, is expected to provide an opportunity for US wheat exports.

This eliminated the 10-per-cent import duty within the quota, and made non-Mercosur suppliers like the US better able to compete with Argentina in the Brazilian market.

Abundant Argentine supplies from its 2019-grown crop resulted in record-large shipments during its peak months from December to March, and gave US exporters little chance to capitalise on TRQ availability.

Argentine shipments typically slow in April based on tightening wheat supplies and competition with corn and soy for export capacity. In its peak export months, Argentina exports to a variety of markets, but primarily focuses on shipping to Brazil in the slower months.

Now that Argentina’s supplies have tightened and its prices are less competitive, Brazil is turning to outside sources and recently announced an additional 450,000t will be permitted for duty-free import this year as domestic prices rise amid a weakening real.

With the TRQ allocation now at a total of 1.2Mt, US wheat exports to Brazil are in a favourable position.  While Canada and Russia will likely compete within the TRQ, the US is expected be the greatest beneficiary, based on a combination of competitive pricing, freight advantage, and historical relationships with buyers.