INDONESIA is the world’s most populous Muslim nation, the world’s third-largest democracy and the fourth-largest nation in the world by population. It is also the closest, and one of Australia’s most important, trading partners. 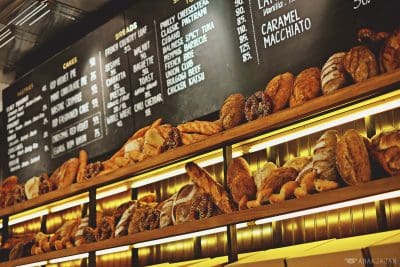 The offering at Union Deli in Jakarta exemplifies the expanding demand for milling wheat in Indonesia. Photo: Anakjajan

The most recent estimates put the island nation’s population at around 265 million, and it is expected to grow by another 30M by 2030. That is an increase of more than the entire Australian population over the next 11 years.

With a growing population comes an increasing demand for food. And like most developing countries, the Indonesian population is urbanising. Its people are moving to the cities at a rapid rate in search of better and more secure opportunities.

Rice has long been the diet staple, particularly in the rural areas, but with the migration to the city centres comes a change in diet. The city folk tend to eat more noodles and bakery products such as bread and pastries. And as people get wealthier, they tend to seek healthier food options such as whole-grain bread as opposed to white bread. Per capita consumption of wheat has increased from 7 kilograms in 1985 to 22kg in 2016 as a result.

Indonesia is totally reliant on imports to meet the demand for wheat-based food, and as an ingredient for poultry and other livestock sectors. The country’s wheat imports are forecast at around 11.5 million tonnes (Mt) in the 2019/20 marketing year (July-June). This compares with imports of less than 4Mt just 20 years ago.

Approximately 9.5Mt of those imports is expected to go into food, seed and industrial (FSI) use, and the balance of 2Mt will be consumed as animal feed. Around 70 per cent of wheat imported for human consumption goes into the noodle market, and the balance goes into bakery products.

In 2018, there were 25 milling companies in Indonesia operating 27 major flour mills. Those mills had a total installed capacity of 11.5Mt per annum, an increase from 11.4Mt in 2017. Most of the mills are located on the island of Java, and the mills ran at around 70pc of capacity in 2017.

Indonesia has traditionally been Australia’s biggest wheat customer, buying an average of 4.2Mt of high-quality milling wheat each year. That is approximately 25pc of average Australian wheat exports and represents shipments of around 350,000t per month.

The latest Australia wheat export data (May) reveals some interesting numbers, and continues an alarming trend regarding wheat exports to Indonesia over the past 12 months. Total Australia wheat exports for the month of May were 1.23Mt. The biggest customer was the Philippines, which accounted for 32pc, or 396,000t, followed by Vietnam with 113,000t and Japan at 99,000t. Indonesia came in fourth at a paltry 86,000t.

However, one month of data doesn’t tell the full story, nor provide a demand trend. Looking at the year-to-date export data (January to May), Indonesia has imported 378,000t of Australian wheat over the five months, an average of less than 80,000t per month.

The statistics for the Australian grain marketing year-to-date (October 2019 to May 2020) disclose a similar story, with exports to Indonesia totaling 624,000t for the eight-month period. That compares with just under 1.6Mt for the same period in the previous marketing season, and is a long way behind the pace required to get close to the 4.2Mt longer-term annual average.

Indonesia has traditionally paid a premium for high-quality Australian wheat, but the message from the Indonesian consumer over the past 12 months was that those days were over, and Indonesia would buy on price from whichever origin could offer the quality required.

And they seem to be walking the talk.

There seems to be a clear message from the Indonesian consumer. If you want our FSI business, you will need to be competitive with an increasing number of origins which can also offer suitable-quality wheat.

In the past, Australia’s primary competitors into the Indonesian wheat market were countries who had a similar cost base, such as the United States or Canada. Now, many of the competing origins, such as Russia, the Black Sea region and Argentina, have much lower costs of production.

Increasing production and export surpluses in Russia and the Black Sea region in recent years have tended to make them the weakest sellers, and the price-setters, in an extremely competitive global wheat market.

Historically, the quality available from these origins has not been acceptable to the Indonesian consumer. However, as export surpluses have increased, so has the quality of the wheat being produced. The Russian and Black Sea producer has recognised the need to improve quality to compete in the global wheat market.

This has made it increasingly difficult for Australia to sell wheat into traditional markets such as Indonesia. In addition, the global sea-freight market has decreased Australia’s competitiveness in recent years because the freight spread between Australian delivery and delivery from alternative origins has been relatively low.

If the current export pace continues for the final four months of the marketing year, Australia will be building wheat stocks ahead of the next harvest, particularly in Western Australia.

The Indonesian wheat market is big, growing and on Australia’s doorstep. In the absence of new markets, it is critical that Australian exporters find a way to reverse the recent trend and at least return Indonesia close to its position as the biggest consumer of Australian wheat.