Argentina loads much of its agricultural exports at terminals on the Parana River. Photo: Peter McMeekin

NEAR 50-year lows in the water level of Argentina’s Parana River at the major port hub of Rosario are severely hampering the flow of agricultural exports and have reportedly cost local industry upwards of US$240 million since the beginning of the year.

The river is a cargo superhighway, taking around 80 per cent of the country’s agricultural exports from the Pampas farm belt to the shipping lanes of the South Atlantic and on to consumers across the globe. It flows through Brazil, Paraguay and Argentina and, at almost 5000 kilometres in length, is the second-longest river in South America.

Ships are still loading, but the low water levels are forcing merchants to load less than the maximum. The reduced draft means that the average panamax vessel is loading around 10,000 tonnes, or up to 20pc less than maximum allowable for safe navigation to open sea from the Rosario grain hub. Handymax vessels have been forced to decrease loading by around 7000t, a reduction of about 17.5pct. Exporters then have the option of sailing directly to their destination and incurring an increase in the freight rate per tonne of cargo, or they can delay delivery and top off their loads at the deep-water ports of Necochea or Bahia Blanca on the Atlantic coast after transiting Rio de la Plata east of Buenos Aires.

Argentina is the world’s biggest exporter of soybean meal and the third-biggest exporter of both corn and raw soybeans. The river-flow issue just adds to the logistics bottlenecks resulting from the coronavirus pandemic, as road-freight to port is slower than normal, and ships take longer to load, despite the smaller cargo. And it comes just as the summer-crop harvest ramps up and export volumes should be increasing substantially.

According to the Buenos Aires Grain Exchange (BAGE), dry weather across much of Argentina has enabled harvest to advance over the last week. The soybean harvest is now 56pc complete, up 6 pc over the week, with yields averaging 3.23t per hectare. The crop condition fell slightly, with 24pc of the crop rated poor or very poor compared with 18pc last week and 11pc this week last year.

Progress of the corn harvest has been a little slower, advancing just two percentage points across the week to 35pc complete compared with 28pc in the same week last year. Corn yields are averaging 9.23t/ha, but there was a slight downward trend compared to the previous week. The crop condition improved slightly, with 12pc in the poor or poor category, compared with 14pc last week, but is much worse than the 5pc this time in 2019.

Despite the ongoing dryness, BAGE has maintained its production forecasts at 50 million tonnes (Mt) and 49.5Mt for corn and soybeans respectively. However, downward revisions for both are likely if last week’s yield trends persist as harvest progresses south into regions that have had a drier finish.

The Argentine government is relying on agricultural export dollars and tax revenue as it struggles with the financial fallout from COVID-19 and attempts to remain solvent while juggling more than US$100 billion in debt. The disruption to shipments from Argentina will exacerbate the situation, as it will force global consumers to seek offers from alternative origins such as Brazil and the United States, to fill supply gaps.

The low water levels are due to ongoing dryness upriver in Brazil, particularly in states at the headwaters of the Parana River such as Sao Paulo, Mato Grosso do Sul, Parana and Rio Grande do Sul. Rainfall across the summer, and specifically in March, has been as much as one-third below average in these states. The rains forecast for April have not been as fruitful as expected, and Brazil is now entering its dry season which adds to the river dilemma.

Brazil has agreed to a request from the Argentine government to discharge additional water from the huge Itaipu hydroelectric dam to raise water levels in the lower reaches of the Parana River. The release came despite resistance from Brazil’s power industry which had baulked at the request due to the low water levels. The dry weather in Brazil has significantly reduced inflows and water reserves in the dam which feeds the world’s second-biggest hydroelectric power plant. The additional water flows come at a time when the plant is running well below capacity as the coronavirus pandemic dampens electricity demand in both Brazil and Paraguay. 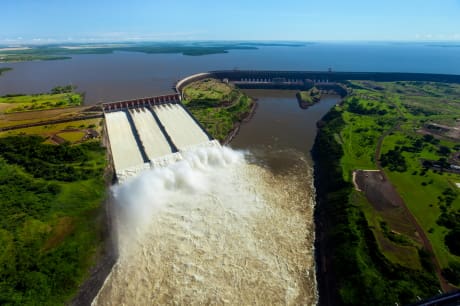 Drought has lowered levels in the Parana River and reduced the amount of grain Argentina can export, but a spill from the Itaipu Dam may boost its ability to outturn tonnage. File photo: Itaipu Binacional

Meanwhile, planting of Argentina’s winter crop will commence in the next few weeks, and farmers are forecast to plant 6.7Mha of wheat. This is an increase of 1.5pc compared with the 6.6Mha planted in the 2019/20 crop year and almost 20pc higher than the five-year average of 5.6Mha. Based on the USDA yield projections of 3.1t/ha, this area would produce a record 20.7Mt of wheat in 2020/21.

The increase in the wheat area is expected to come at the expense of barley production, which is projected to fall to 3.3Mt in the upcoming campaign. This is from a planted area forecast to drop by more than 15pc from last season to just 850,000ha.  Although barley is harvested two weeks earlier than wheat, allowing the second soybean crop to be planted earlier, the majority of farmers struggle to produce the yields needed to outstrip wheat returns. This is mainly because they struggle to produce higher-priced malting barley, while reaching milling-grade quality in wheat is much easier.

With a bigger wheat crop comes a larger export surplus. Exports in the 2020/21 marketing year are estimated to reach 13.4Mt, the second largest in history. However, this could easily go higher if the currency continues to devalue against the US dollar and world demand recovers following the COVID-19 slowdown.

While Brazil will continue to be the primary wheat destination, taking around 50pc of total exports, South-east Asian markets are the second biggest destination. With the Peronist government desperate for export income, it is likely to provide keen competition for Australian exporters trying to rebuild market share in the first half of 2021.