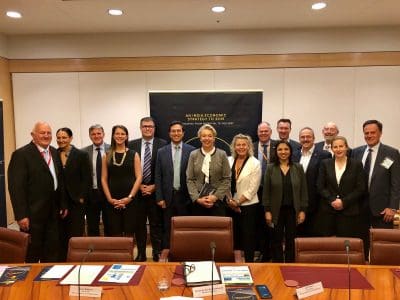 AUSTRALIA is forecast to produce 333,500 tonnes of lentils and 256,600t of field peas from the crop now being harvested, according to the latest estimate from Pulse Australia.

The industry body has estimated the 2019/20 lentil crop at 27 per cent below the 2018/19 crop, but up 7pc on the previous estimate released in August because of improved yield prospects in the Victoria.

Prepared in conjunction with the Grains Industry Market Access Forum (GIMAF) with support from the Australia-India Council, it helps growers make decisions about upcoming pulse plantings, and informs the Australian supply chain about global trends and drivers.

While India looks likely to remain closed to imports of chickpeas and lentils in the near future as Australia’s key pulse market chews through its domestic stocks, Pulse Australia executive officer Nick Goddard said tightening world stocks were providing support to pulse prices.

Mr Goddard said supply was becoming better matched to demand, so the lacklustre market of the past few years may be approaching a period of change, with faba bean stocks very low after last year’s “all but complete vacuuming” of the supply chain, and tightened global lentil stocks.

“These factors are important, given Australia’s relative strength in faba beans and the lentil over-stock situation Australia has been dealing with for the past few years,” Mr Goddard said.

“By the time Australian seeding commences, we should have a clearer picture of likely Indian chickpea rabi production, and hopefully will have had some decent summer…to recharge the very dry soils.

“After some very tough years for the Australian and broader global pulse markets, there are some very early signs that 2020 might see the beginning of a return to a more stable global trading environment.

“While India holds the key, the growing strength of China in the protein fractionation market over recent years, and the implication on demand and trade flows, should not be underestimated.”

The “plant-protein epidemic’ will also have an impact on S&D, but the dietary habits of 1.7 billion people in South Asia, and domestic pulse production and policies in those markets will continue to be the single largest determinant on pulse market conditions for many years to come.

Australia’s pulse exports to India are unlikely to reach the heady volumes last seen in 2016/17.

Mr Goddard said India appeared to be well on its way to its objective of self-sufficiency in pulses, with improved genetics and farming practices increasing its ability to reliably grow better-yielding crops.

This year’s recent monsoon left Indian and Pakistani cropping areas up to three weeks later than normal, which has impacted the kharif, or Indian summer-crop, pulse harvest, and delayed the seeding of its rabi or winter crop.

Mr Goddard said the late withdrawal of the rain is said to have had a significant impact on the amount and quality of tur (pigeon pea) and urad (black mung) in the key producing states of Karnataka and Maharashtra.

With India’s pulse supply-and-demand scenario “pretty much on a knife-edge,” with demand estimated at 25.4Mt and domestic supply at 25.6Mt, this is already buoying prices.

“The likely shortage of some of the kharif crop is starting to lift prices, and the Indian Consumer Affairs Ministry recently called for removal of import restrictions to enable demand to be met without the impact of rising prices.”

Tur prices have now risen by around one-third since thestart of the year, and an Indian Government official has said imports are needed to stop them from rising further.

“Urad is in an alarming position, with almost half the crop damaged in the major growing states of Madhya Pradesh in excessive rain.

“Our assessment is that removal of import restrictions will not occur at the speed at which they were implemented, but easing may occur in 2020.”

Chickpeas and lentils are planted in India and Pakistan from October to December, and the late departure of the monsoon could well have a neutral effect on production, with good yields from replenished subsoil-moisture reserves offsetting the impact of a later or reduced planting.

Improved yield prospects in South Australia have seen Pulse Australia add 1000t its production estimate for field peas, with the national crop now being harvested seen at 256,600t, up 41pc on the 2018/19 total.

India has begun classifying its peas by different seed colour and type, which allows some flexibility in terms of importing which was not possible when the quota was initially set for all peas.

“For Australia, this could herald a specific quota, or lifting of quota, on green Dun and Kaspa-type peas.” 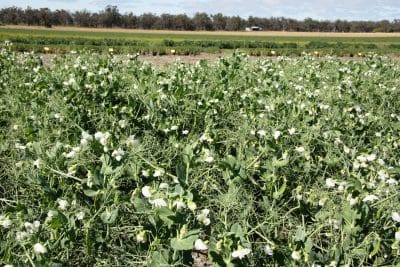 At the time the blanket quota was imposed, Pulse Australia made representation to the Indian Government proposing that green peas should be excluded because of their different and discreet end-use, mostly in savoury confectionery.

“Indian green-pea domestic wholesale prices have been nudging US$800/t recently, so there could be some appetite amongst Indian regulators to allow more green pea imports to curb any further price rise.”

Mr Goddard said progress was being made towards India considering the acceptance of phosphine as a fumigant in place of methyl bromide.

Assisting this was a visit in October from an Indian delegation led by the new Joint Secretary of the Indian Ministry of Agriculture & Farmers Welfare and hosted by Australia’s Department of Agriculture hosted to increase understanding about the phosphine fumigation process in Australia.

The delegation observed the Australian supply chain from farm to port, and Pulse Australia reports it was impressed with processes used to manage pests in stored grain.

“We are optimistic that India will approve an alternate phosphine fumigation protocol compatible with Australian standards in the near future.”

If and when this change occurs, Mr Goddard said it would remove a significant cost and time impediment for pulse exports to India.

Pulse Australia has flagged an emerging impediment to Australian pulse and grain exports with the expansion of the Indian Plant Protection Organisation’s (IPPO) list of prohibited weed seeds for plant and plant products.

Many of the weed seeds listed are not present in Australia, but Australian pulse exporters are now required to present a laboratory analysis certificate for a representative sample of the consignment attesting to the absence of prohibited weed species.

Australia’s Department of Agriculture has issued a Trade Advice Notice in relation to these additional phytosanitary requirements.