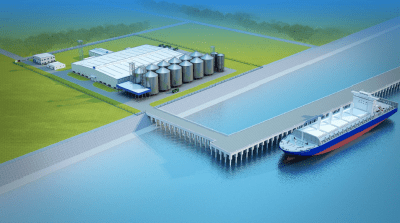 A bulk terminal at Thilawa is under construction in Myanmar. Image: Kamigumi

MYANMAR’S first major grain terminal is expected to be a boon to Australia’s wheat exports as they transition from containers to bulk, but will boost the competitiveness of Myanmar’s pulse exports into key Australian markets in South Asia.

To be known as the International Bulk Terminal Thilawa (IBTT), it will be one-quarter owned by Japanese logistics company and terminal operator Kamigumi, with the balance to be held by Lluvia.

Lluvia is a Myanmar miller and processor which is majority owned by local conglomerate Capital Diamond Star Group, with Mitsubishi the minor shareholder.

Reports say IBTT will cover eight hectares and have an effective capacity of 1 million tonnes (Mt) and will include a 230-metre jetty and an onshore complex with 40,000t of vertical storage and a 20,000t capacity in grain warehouses.

The terminal at Yangon is expected to serve Lluvia, which owns and operates the Diamond Star Flour Mill in Yangon, with some additional third-party demand, and is expected to start operations this year.

It will be located roughly 16 kilometres downstream from the Yangon city port area in the Thilawa Port Zone on the eastern bank of the Yangon River in the Kyauktan township.

Myanmar has become a hugely significant market for Australian Prime Hard wheat in recent years, and USDA figures show the growth of Myanmar’s wheat imports, from 179,000t in 2009 to 500,000t in 2018.

This is despite container rates into Yangon being arguably the most expensive in Asia for any Australian shipper.

Trade sources have said rates of $800-$1000 per 20-foot container are usual for wheat going into Yangon, largely because boxes need to be transhipped via Singapore or Malaysia.

This compares with rates as low as $300 for 20-footers going into China, where shipping companies can easily fill boxes with manufactured goods bound for Australia.

The impact of the Thilawa terminal could drop wheat freight rates from around AU$50/t, based on 20-footers holding 26t, to around $25/t, based on a Handymax-sized cargo of around 30,000t, and less if the new terminal can accommodate the larger Panamaxes.

Myanmar is Southeast Asia’s major producer and exporter of pulses, and an August 2018 USDA forecast had its production for the current marketing year at 3.8Mt, and exports at 900,000t.

Myanmar is also a significant producer of faba beans, pigeon peas and lentils and, beyond India, its markets include its neighbours Bangladesh and China, as well as Europe, Indonesia, Malaysia and Vietnam.

The International Finance Corporation (IFC), a member of the World Bank Group, is providing long-term financing of US$15 million to the project, which has an estimated cost of $65m.

With Myanmar’s strategic geographic location, a port expansion program could help the country to develop as a regional trans-shipment hub.

“As one of the first providers of specialized bulk cargo handling, this project contributes to the diversification of port services in Myanmar,” IFC country manager for Myanmar Vikram Kumar said. 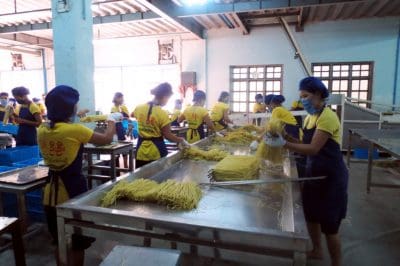 Noodle manufacturers in Myanmar are major uses of flour made from high-protein Australian wheat. Photo: AEGIC

“The Myanmar wheat market will continue to grow and can reach 1 million metric tonnes in the years ahead, potentially worth over $300 million,” he said.

“Bulk shipping is a game changer for the Myanmar flour and feed milling industries and will change the dynamic of this market. AEGIC is working hard to maintain Australian wheat relevance and presence in this market as it grows.”