DISRUPTIONS caused by the COVID-19 pandemic negatively impacted demand in particular for industrial processing, but as the current 2019/20 (July-June) year winds down, total wheat and coarse grains consumption and trade volume this year still will have made new records, according to the International Grains Council (IGC) April Grain Market Report. Corn planting is now winding down in parts of the northern hemisphere. Photo: US National Corn Growers Association

COVID disruption has trimmed this month’s forecast for world 2019/20 total grains consumption, which is down by 11Mt from the March estimate of 2181Mt.

The figure still sits well above 2164Mt and 2151Mt consumed in the previous two years.

Industrial usage had shrunk, led by a sharp slowdown in processing of ethanol derived mostly from maize, but international trade in maize continued to rise.

IGC has forecast the current-season total wheat and coarse grains trade at 381 million tonnes (Mt), up from 364Mt and 370Mt respectively in the two prior years.

Volume increases in 2019/20 have come mainly in shipments of wheat and sorghum. 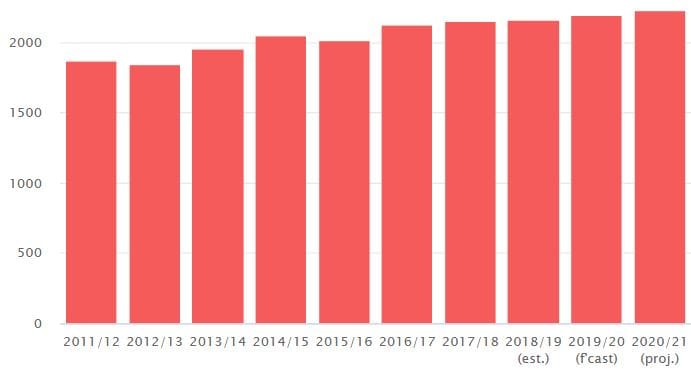 Last month’s report projected world consumption would again grow strongly to a record 2222Mt, led by a 5-per-cent increase or 17Mt increase in industrial use, and food and feed use increasing 1-1.5pc, or 10Mt and 14Mt respectively.

Trade for 2019/20 is projected to rise by 1pc to 384Mt, with trade in maize seen as expanding for the twelfth successive year to 173Mt.

World grains stocks are expected to edge lower to 617Mt compared with 620Mt, 625Mt and 650Mt in the three years prior, with two years of rising wheat inventories dwarfed by stock reductions for maize and barley.

Some price support stemmed from less-than-ideal conditions for 2020/21 crops in parts of Europe and the Black Sea region.

The barley sub-index was down 0.7pc and the maize sub-index fell 12pc.

The IGC grains and oilseeds freight index declined 20pc in the month between March and April, a reduction of 38pc compared with one year ago.

It attributed the decline to sliding bunker prices and reduced demand for smaller supramax and handysize bulk carriers. This is the lowest level of the freight index in four years.