Ocean freight rates on the rise Panamaxes loading Australian grain for Asia may be advantaged in a strong ocean-freight market. Photo: Glencore

GLOBAL sea freight rates are on the rise, with the Baltic Dry Index (BDI) posting its largest-ever weekly gain, underpinned by a rebound in global commodities trading. The index affords a glimpse into the future by providing a real-time indicator of global demand for commodities and raw materials.

The 35-year-old index is issued daily by the London-based Baltic Exchange. It is a composite of the time charter averages for capesize, panamax and supramax vessels used to ferry commodities such as coal, iron ore and grains.

It is a measure of the correlation between the supply of large bulk cargo ships, and the demand to utilise those ships on 20 of the world’s busiest dry-bulk shipping routes. In March 2018, the BDI vessel ratios were reweighted to 40 per cent capesize and 30pc for both panamax and supramax; handysize vessels were excluded.

The index climbed a modest 1.8pc, or 28 points, on Friday to cap a record weekly gain of 68.5pc and close at a six-month high of 1555 points (Graph 1). It has soared almost 300pc since the low of 393 points set on May 14 in the wake of a halt in global trade due to coronavirus lockdowns. 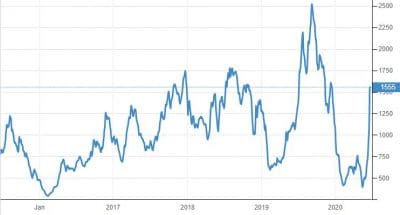 A revival in iron ore demand by Chinese steelmakers, coupled with increased production and exports of iron ore from Brazil, are the key drivers of the recent strength. China’s crude steel output hit a record high in May, and iron ore inventories have dropped steadily in June to under 108 million tonnes (Mt), their lowest since October 2016.

The length of the rally will most likely depend on how resolutely China replenishes depleted raw material stocks, as well as the ongoing COVID-19 recovery and government stimulus activity across the globe. The worst of the impacts on trade appears to have passed, and the gradual reopening of economies will boost the dry-bulk market.

It is not only iron ore on China’s shopping list. China is quietly buying up soybeans in astounding quantities, having sucked Brazil dry in a little over three months of marketing, and has now turned to the US. Official export data shows Brazil shipped almost 31Mt soybeans in April and May, with 22.2Mt of that going to China, some 66pc more than in the same period in 2019.

It appears this may be more than restocking; there have been persistent market rumours that China wants to double the size of its bean reserve from an estimated 7Mt in recent years to 14Mt or even 15Mt. With a weekly crush of more than 2Mt, the current stockpile doesn’t buy them much security were something to interrupt the soybean pipeline.

The trade war has demonstrated that the supply chain can be disrupted, not only by natural causes such as drought and flood but by political issues as well. Add a global pandemic, and China is rightly concerned. It is in the interests of the Middle Kingdom to increase its reserve, and that is precisely what appears to be happening at the moment.

China reportedly pledged to ramp up buying of US agricultural commodities after the Hawaii summit last week between the US Secretary of State and the Chinese Foreign Minister. Rumours suggest that, in addition to soybeans, Beijing will grant quotas for 5Mt of corn and 3Mt of wheat in the near future.

The rise in sea freight rates was evident last week when the result of the latest Egyptian (GASC) wheat tender was announced. On 10 June, GASC purchased 120,000t of Russian wheat for mid-July delivery with a freight rate of $10/t.  Last week, GASC purchased 240,000t for late July-early August delivery, half of which was Russian origin, where the average freight rate was almost 20pc higher at $11.82/t.

That business was put on before last week’s surge in sea-freight values. This is certainly the type of market where getting the consumptive business on the books and going short the freight could get very messy.

On the other hand, higher sea freight rates tend to increase the competitiveness of Australian agricultural exports into Asia. The sailing time from key origins such as the Black Sea, the United States, Canada and Argentina, are all much more than that from Australia.

If winter-crop production prospects remain buoyant here in Australia and the sea-freight rally is sustained, it could provide a welcome boost to the prospects of rebuilding export relationships and supply pathways into critical Asian markets late this year and in the first half of 2021.