A SIGNIFICANT market that has emerged in South Korea for winter-grown Australian gritting corn is being supplied by growers in Western Australia’s Ord region who are making big agronomic gains with the help of FIFO agronomists Rob Crothers and Andrew Dieckmann from Pioneer Seeds Australia.

Through the port of Wyndham, the region is now shipping its biggest ever corn program of 30,000 tonnes to customer Dong-Il Grain.

“There is now a core group of growers who are looking at expanding their area to supply Dong-Il, and also a domestic feed market,” Mr Crothers, who is also Pioneer’s Toowoomba-based northern regional manager, said.

It took three and a half days to load this ship at Wyndham Port WA with 11,000 tonnes of Pioneer® corn hybrid P1756. The cargo is bound for a dry miller in South Korea. Another ship is due to be loaded mid-January… pic.twitter.com/GTABDtmLAc

Video: One of three shipments of gritting corn bound for South Korea and grown in the Ord loads at Wyndham in Western Australia. 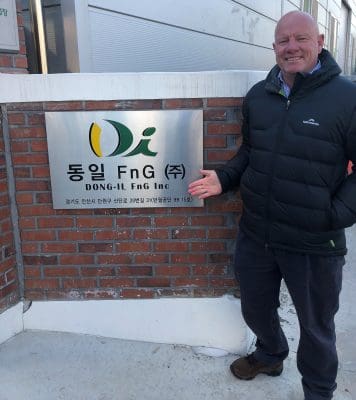 “We met at a summer grains conference at the Gold Coast, and got talking.

“He said Australia was his best port of call for non-GM corn, and several years after that meeting, Robinson’s Grain, ORDCO and Mr Yum worked together to get 10,000t to Dong-Il of off-season corn grown in our 2017 winter, when supplies were tight elsewhere.”

The first crop was not without its problems.

“When Dong-Il processed the corn, they found the grain size was too small, and the kernels were too dry, which causes fracturing in the dry-milling process.”

From a grower perspective, the 2017 experience was also less than ideal.

“The Ord farmers were disappointed with the yield and the profitability, and Mr Yum approached me to find out why these problems existed.”

With higher yields and larger kernels the objective, Mr Crothers gave an assurance to Mr Yum that improvements could be made in the performance of the Pioneer varieties as grower-members of the Ord River District Co-operative (ORDCO) came to terms with a crop that was new to many of them. “Working with ORDCO, we got all the growers in, and ran a corn agronomy workshop to look at how we could produce yields in excess of 13 or 14t per hectare, instead of the 6-12t/ha we got in the first year.”

“To help them achieve that, we do FIFO agronomy, and either Andrew or myself fly up three or four times during the growing season to help with management decisions.”

Those decisions have covered type, timing and rates of fertiliser, watering schedules and amounts, and how to get the best results out of precision planters, which many growers were using for planting corn for the first time.

Mr Crothers said the Ord’s corn producers had now grown in confidence, and were looking forward to their next delivery of planting seed from Pioneer in April in time for a May-June planting and harvest between September and November.

Mr Crothers said corn was showing potential as a good crop to grow during winter in rotation with cotton grown over summer.