DEMAND from Pakistan has kicked prices for Australian chickpeas delivered to up-country packers to a high for the year of $670 per tonne, with further upside seen if significant rain does not fall in Australia’s key growing areas in coming weeks. 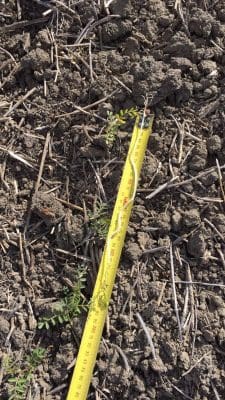 Australia’s new-crop chickpeas have germinated from depth and have mostly received very little recent rain to help them along. Photo: Alex Trinder, HMag

“The market for June-July is at $670/t delivered Darling Downs, when six weeks ago it was $600/t,” Associated Grain trading manager, Mark Schmidt, Dalby, said.

“The Pakistani crop is not as great as they thought it would be, and we expect them to continue buying in the next month or so.

“They are buying to cover their shortfall in production, and a lot of our old-crop has traded, so there’s not a lot being offered.”

While the Australian Bureau of Agricultural and Resource Economics and Sciences (ABARES) this week forecast the Australian chickpea crop still being planted at 616,000t from 528,000 hectares, industry sources see both the tonnage and area forecast as double what is likely to be achieved.

They estimate as little as 200,000ha of chickpeas have been planted in Central and southern Queensland, including the Darling Downs, and northern New South Wales.

“That’s all relying on rainfall shortly to improve its yield prospects, and we could get a crop of 500,000t, but if the dry conditions continue, yields could be closer to 1t/ha.”

Graintrend director, Sanjiv Dubey, said the chickpea trade in Pakistan was watching the Australian weather with intense interest as it weighed up whether to advance its buying of old-crop, or wait for Australian new-crop to hit the market in October.

“If there is no rain in Australia over the next four weeks, that ABARES figure will have to come down,” Mr Dubey said.

“They know that if it rains in Australia in the next couple of weeks, the prices will soften, but if it doesn’t, it is certainly possible that prices will go up even further.

“They’ve imported a fair bit and they’re in a dilemma about whether they should import now, or wait for new-crop, but the drier it gets, the more the weather is going to prop up the market.”

Mr Dubey said Pakistan could take the unusual step of importing Indian chickpeas, purchase of which was restricted at present, at a nominal discount of more than US$100/t to Australian product.

“It has happened in the past, but it’s not a regular market, and we’re seeing demand only from Pakistan.

“If they stop buying, there’s no volume market for our chickpeas.”

Mr Dubey said Pakistan could substitute some of its chickpea import requirement with yellow peas, and would also be buying some tonnage from Ethiopia and Kenya.

“Their chickpeas are cheaper than ours but the quality isn’t as good, and their total export surplus might be 50,000t, but it does play a part in the market.”

Mr Schmidt said Bangladesh was sourcing its import needs out of India for a cheaper price than it could land chickpeas from Australia.

“There’s no news on India, and the next critical thing to watch is their monsoon season,” Mr Schmidt said.

India is traditionally Australia’s biggest chickpea market, but its large domestic crop has closed the door to imports for the foreseeable future.

According to Australian Bureau of Statistics data, Pakistan was Australia’s largest export market for chickpeas in April, a position held by Bangladesh in February and March.

Nearly all of Australia’s chickpea crop now in the ground was sown on little or no planting rain, and is relying entirely on subsoil moisture.

Many crops were planted at a depth of 20 centimetres or more, and further chickpea area, especially in the later-maturing areas of NSW, could be planted as late as the second half of July.

Chickpea crops which are out of the ground have germinated evenly in most cases, but will benefit from rain in coming weeks which will help to replenish subsoil moisture reserves.

Due to the non-determinant nature of chickpeas, the crop could also benefit from rain late in the growing season, as occurred last year, when spring rain prompted a second round of flowering and pod set.