THE MARKET for Australian wheat in Papua New Guinea (PNG) is continuing to develop as some of its flour and stockfeed millers switch from containerised to bulk wheat deliveries for use at established and new plants.

Trade sources have said the bulk shipments were enabling buyers to take larger quantities in one hit, and to reduce logistics issues tied to the use of large numbers of containers.

The biggest new development is being undertaken by Australian company Goodman Fielder, which started milling flour in PNG in 1975.

The PNG-owned Mainland Holdings, which produces Three Roses Flour, also has flour and feed mills at Lae, where a small bulk-handling storage has allowed this key PNG milling operation to transition out of container to bulk grain.

Mainland Holdings mills around 45 per cent of the 250,000 tonnes of Australian wheat PNG uses per annum, with Goodman Fielder and poultry producer Zenag consuming the balance.

Ceres Australasia director John Arrigo is Cargill Australia’s exclusive agent in the region, and has been involved for decades in sourcing wheat for PNG customers, who prefer to buy varieties grown in eastern Australia.

“Most of the wheat PNG buys is for milling into flour which goes into loaf bread and home cooking,” he said.

A few years ago, 30-40pc of wheat being shipped into PNG arrived in containers, and in small bulk consignments of up to 5000t.

Vessels for all the major consumers are now typically bringing 16,000-20,000t wheat cargoes into Lae and Port Moresby.

“In recent times, freight rates in the bulk market have softened, and that has widened the gap between container and bulk freight.”

“There are 7.9 million people in PNG and economically, it makes logistical sense for PNG to import wheat in bulk.”

With an annual average rainfall of more than 4000 millimetres and an average of 250 rainy days per year, the Lae climate can make the unloading of bulk vessels with grabs difficult.

“It’s a market not without its challenges, but it is growing.”

Mainland Holdings is owned by PNG National Superannuation Fund and Markham Valley farmers, and started life as a coffee co-op. 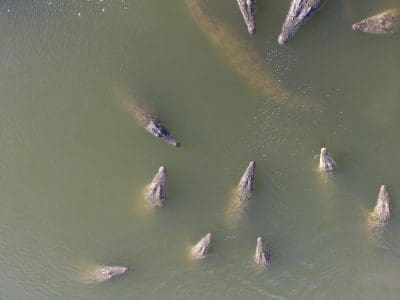 It now operates mostly in poultry, and owns the Tablebirds Brand, which processes around 250,000 chickens per week at its broiler plant.

Based in Lae in the Morobe province, Mainland Holdings also collects up to 1.5 million eggs per week, and runs a 35,000-head crocodile farm to produce skins for sale to Asia and Europe.

Its crocodiles are fed on the mortalities from the broiler farms.

At present, the company uses around 40,000t of Australian wheat annually in its stockfeed mill.

Small-scale poultry production is a mainstay of the PNG economy, and the lifestyle of its population which is recognised as being one of the most sustainable in the world.

As part of this, Zenag, which was started in 1946 by Toowoomba’s Leahy brothers, now supplies around 7000 PNG families with day-old chicks.

These are grown out to help feed those who rear them, with the surplus sold at local markets.

Mainland Holdings supplies a network of 260 out grower farms in the Lae and Port Moresby districts, and these supply more than half the company’s broilers.