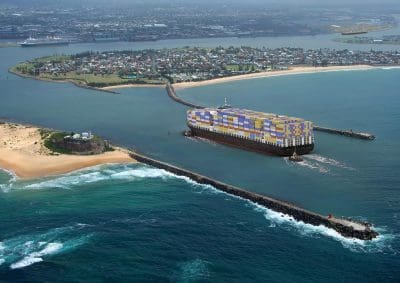 PLANS for a new container terminal are taking shape at the Port of Newcastle (PON) as a way for agricultural exports in the northern half of New South Wales to save around $10-$15 per tonne on grain they currently ship out of Port Botany and the Port of Brisbane.

The site at Mayfield was previously home to BHP Waratah, and has been leased by the NSW Government to PON, which administers 800 hectares of land.

PON executive manager of customer and strategic development Ian Doherty said its ability to accommodate ultra-large container vessels (ULCVs) and long trains were the basis for its competitiveness on freight rates.

These vessels mark the next generation in sea freight, and of containers getting up in scale towards the Neopanamaxes, which can carry up to 14,000 twenty-foot equivalent units (TEUs) and fit through the recently expanded Panama Canal locks.

“We are designing a container terminal with wharf, berth and landside capacity to be able to accommodate ULCVs carrying more than 10,000 TEUs from stage one,” Mr Doherty said. 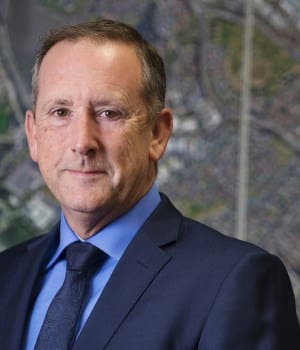 “From day one, we plan to be handling trains of 1.3-1.5 kilometres in length, and future-proofing the network by giving it scope to take 1.8km trains, which is longer than ARTC can handle today.”

Trains entering Port Botany are currently limited in most cases to around 600 metres.

“As a privatised business we’re looking to grow and, beyond coal, the one that moves the needle is a container terminal.

“Demand for a container terminal has never been greater.”

The GrowerCo cooperative has been open in its support of a container terminal in Newcastle, and Boolah Commodity Management principal and GrowerCo member director Stuart Tighe said the proposed terminal offered significant savings to agricultural exporters.

“It would enhance and grow business opportunities in the container market that may not be there today because of constraints of getting into Botany tied to pathing trains, and it’s cheaper than getting containers into Brisbane by road.

“From Narrabri to Newcastle, there’s already a good heavy railway line that’s servicing coal, and it’s ready to be utilised.

“It would be much more efficient for the industry to be using more rail.”

In one of several reports commissioned by PON, Namoi Cotton logistics and commodities manager David Titterton said the company expected the proposed terminal at Newcastle to improve the cycle time of its trains, resulting in reduced cost per bale exported.

The Hunter Research Foundation Centre report said Namoi Cotton was increasingly looking to export through the Port of Brisbane as the logistics of getting its trains of 900 metres in length through Sydney’s congested system into Port Botany became more challenging every year.

“If you’re going into Newcastle, your cycle time is that much quicker,” Mr Titterton said in the report.

“You can turn your trains around, hit all your windows and meet all your shipping requirements.”

Namoi packs grain and cotton grown in NSW into containers from multiple sites north of Dubbo, up to and including Goondiwindi on the NSW-Queensland border.

The containers are railed to Port Botany from its Wee Waa and Warren sites, and transported by road to Brisbane from Goondiwindi.

Namoi Cotton said rail delays into Botany can mean missing a ship departure and having the train load go into a container park, increasing costs by up to $300 per container.

“Getting through Sydney Metro is very difficult.

“If your train is a little bit late, you get held up. Once you miss your window, it can be very costly.”

Mr Titterton said he expected all containerised cotton and grain would be shipped out of Newcastle if appropriate shipping lines visited the proposed terminal, and it made sufficient empty containers available.

“The port would also need to deal with the challenge of the fluidity of global markets – destinations for Namoi Cotton’s exports change from year to year, as do shipping prices and the lines used.”

Freight from warehouse to Botany is currently around 8 per cent of the cost to Namoi Cotton of a bale of cotton, and around 15pc of the cost to growers of grain.

Table 1: The AlphaBeta report compared Newcastle with Port Botany and Port of Brisbane in terms of container transport costs and found savings using Newcastle of $193 to $583 per TEU.

The Mayfield site has direct access to the Hunter Valley Rail Network linking to Narrabri and Dubbo, and the Country Rail Network which connects to Narromine and Coonamble.

“Essentially, we are already connected to inland rail via an uncongested rail link,” Mr Doherty said.

PON was also looking at a “full supply-chain model” to incorporate up-country intermodal terminals, where rakes could be assembled to start or add to train sets.

“We anticipate being able to offer exporters in our catchment significant savings as an alternative lower-cost supply chain solution, being the closest port to the freight’s origin.

Mr Doherty said the proposed terminal would be fully automated, and would enable containers to be unloaded from trains adjacent to the berth without the need for a nearby intermodal terminal.

Operators at the Port of Newcastle currently handle a total of around 8000-10,000 TEUs per year, mostly timber and trans-Tasman consignments.

“More than 140,000 containers a year come into Newcastle and then go by rail to Botany for export.

“The sooner Newcastle gets its own container terminal, the better.”

The terminal proposes to operate two 800m berths and one 400m berth for visiting ships.

Speaking after the release of AlphaBeta’s report into the PON container terminal proposal, PON CEO Craig Carmody said global shipping companies were moving to very large vessels – those handling up to 18,000 TEU – that substantially reduced the cost per container.

“Australia’s east coast ports are unable to efficiently accommodate these large vessels, which are twice the size of the maximum the capital cities can handle,” Mr Carmody said.

PON has said eastern Australia’s three major container ports — Botany, Melbourne and Brisbane — were not likely to be able to take ULCVs in the near term.

In 2018, Australia’s total throughput of containers will be over 8 million TEU, and had an 11pc cent growth in Australian container volumes.

PON is jointly owned by Australian superannuation vehicle The Infrastructure Fund (TIF) and China Merchants Ports, one of the world’s biggest terminal operations.

Its agricultural lessees are GrainCorp and Newcastle Agri Terminal (NAT) at Carrington, and Cargill on Kooragang Island, which is also the home to PON’s major tenant, Port Waratah Coal Services.

With three terminals, it is the world’s largest coal-export facility, and loads 160Mt tonnes of coal per year.

This arrives via the ARTC rail network, which links to the proposed Melbourne to Brisbane Inland Rail Project.

The container terminal site is the only one at PON the company plans to operate itself.

Tomago Aluminium is located roughly 20km from PON, and annually exports more than 500,000t of aluminium in containers which are currently railed into Port Botany for shipment.

They are expected to be one of the Newcastle container terminal’s volume customers, as are meat exporters currently rail-freighting containers out of sidings including Dubbo.

Mr Doherty said there was a strong case for a balance of container import/export volumes through the Mayfield site.

“Our preliminary analysis has identified several import trades destined for locations within the port’s catchment, particularly in the mining and manufacturing industries, as well as a share of containerised imports to service the regional population.”

Negotiations with DP World, which operates one of Port Botany’s three container terminals, to operate the Newcastle facility have terminated amicably.

“We’ve got the design completed, and we’re now moving into planning approvals, and a more detailed design.”

“We already have a basic design for the terminal, and it’s more aligned with Flinders Ports in Adelaide, where we will own and operate the facilities.”

A construction phase of up to two years is not expected to start before 2021, which gives the PON container terminal an earliest opening date in 2023.