Proximity Australian wheat’s only plus in Indonesia: AGIC

AUSTRALIAN wheat is losing market share in Indonesia to cheaper origins, and its proximity to Indonesia is its only advantage in this evolving market. 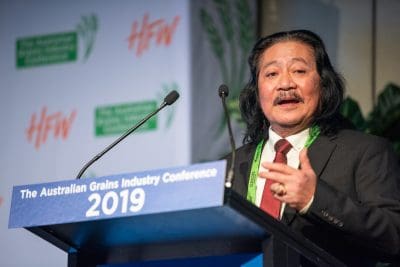 That was the message from Association of Flour Producers in Indonesia (APTINDO) chairman and PT Indofood Sukses Makur Tbk (Bogasari Flour Mills) director Franciscus “Frankie” Welirang in his address to the Australian Grain Industry Conference (AGIC) in Melbourne last week.

Indonesia has traditionally been Australia’s biggest wheat market, and Mr Welirang said its sales had fallen markedly in recent years as Argentina and Black Sea-origins increased their sales to Indonesia.

“Australia is dropping,” he said.

Mr Welirang said Australia had only one advantage in supplying Indonesia with wheat.

“There is only one for Australia: close proximity to Indonesia.

“There is only one week shipment time.”

He said price was the advantage of Indonesia’s rising suppliers.

Mr Welirang said competitive pricing from new volume suppliers was challenging Indonesia’s longstanding view of Australian, Canadian and United States wheat as preferable, and wheat shipped from the Black Sea as a filler.

“The Indonesian customer has been educated on that.”

He said increased use of cheaper Black Sea wheat in milling produced a flour of quality long-term customers were not used to, and the industry was adjusting to the way it was used in order to get good results.

Mr Welirang said baker education or re-education about how to use flour made from a significant proportion of Black Sea wheat was occurring as the market responded to the cheaper origin.

“This wheat mixing would govern the end flour quality, and we try to match that mixing time and water for the industries.

“To us in the flour industry, it is more how our R&D is matching up to customer demand.”

Mr Welirang said new mills could educate new customers on how to get the most from flour made with a high proportion of wheat from the new suppliers such as the Black Sea.

“That new market of the Black Sea will come up.”

Mr Welirang said Indonesia was coming up to its third year of using significantly less Australian wheat than it had previously.

“It’s getting less and less. Even though it’s close…the competition of coming back, of re-educating, would be a new challenge.”

He said the Australian grains industry needed to look at the new type of new consumer in Indonesia, and supply a wheat that would be suitable for the more diverse use of the modern market.

“For the farmer, the type of wheat…is a key.”

Mr Welirang said the decentralised Indonesia flour-milling sector meant customers now needed to be serviced “island by island, city by city” across a wider geographical area than in decades past, and Australia could perhaps excel at servicing them.

“You have all the facilities; your terminals are very advanced.”

Mr Welirang is a veteran of Indonesia’s flour-milling sector, which he said had just four mills up to 1998, when Indonesia’s logistics bureau, better known as BULOG, relinquished control of the market.

Indonesia is now served by 28 flour mills, 23 on the island of Java, and five on other islands, with a further four mills now under construction.

Mr Welirang said four mills were under construction, two PT Wilmar Nabati Indonesia mills at Dumai in South Sumatra and Gresik, East Java, and two in West Java, one a Bogasari facility at Cibitung, and the other a PT Bungasari mill at Cilegon.

Mr Welirang said Indonesia imported 11.5 million tonnes (Mt) of wheat in 2017, with around 8Mt milled for flour, and the rest used for stockfeed, also a growing industry.

Indonesia’s feed-milling sector has also expanded in capacity in recent years by around 5Mt to 25Mt.

“It is spread all across Indonesia, and I think it’s still growing, especially for poultry feed and aquafeed.

“The flour industry in Indonesia is still growing.

“The biscuit industry is still growing, and the noodle industry also.

“The one that is surprising is the bread industry and cake industry.”

Mr Welirang said when compared with rice and other carbohydrate sources, wheat remained the cheapest commodity to turn into flour.

“That gives us the confidence that the growth is still there.”

He said these SMEs were changing Indonesia’s flour use, and included a trend towards home baking, seasonal demand as driven by festivals, or for sale to other households.

“You have many housewives doing this in Indonesia. We try to cater for this demand.”

Mr Welirang said millennials — those born between 1980 and 2000 — represented 153 million people in Indonesia.

“They are dominating the population pyramid.

“Their incomes are growing.

“They are going to define our market.

“The new consumer, they buy an experience; they don’t buy product, they buy image.”

Mr Welirang said millennials were driving change in the way Indonesia used flour through their support of artisan or boutique bakeries.

“This is a new type of customer.”

He said social-media influencers like Tintin Rayner, who has 688,000 Instagram followers, were promoting cakes and bread which could be ordered electronically.

“The marketing is a perception.

“They want to influence their friends.”

Mr Welirang said these social media-promoted products were important in Indonesia’s changing flour use, as was the trend towards ordering food electronically.

“If you have not, you are not the modern type.”

“What we keep on saying is the end user is changing demand.”

Mr Welirang said a traditional characteristic valued in Australian wheat has been its colour stability, either white or yellow.

“Tomorrow, it may not be.

“When you’re talking about health noodles, you have noodles with dragonfruit juice and the colour becomes red.”

He said carrot and other colourful foods could also work their way into dishes which include noodles, and that taste, texture and smell were all important qualities to consider when supplying wheat to the changing Indonesian market.

“The new research must look at the future.

“The flour mills are still growing, the flour industry is still confident…but new demand is coming up.”

Mr Welirang said price would remain the dominant factor in determining where Indonesia bought its milling wheat from, but that the industry also needed to produce a stable standard of flour to satisfy its customers.

However, Indonesia has slipped to Australia’s fourth-biggest bulk market, according to January-June 2019 export data from the Australian Bureau of Statistics.

Mr Welirang said Indonesia exports some flour, and January-May 2019 figures showed a total of 13,678t was shipped, with East Timor on 7113t and Papua New Guinea with 2857t the biggest customers.