THE booming popularity of pulse crops in tropical Queensland is positioning Townsville as a port of significance when it comes to containerised grain exports. 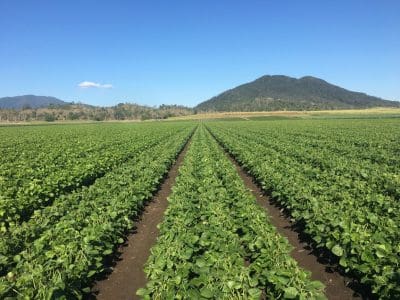 A crop of mungbeans growing in the Burdekin.

Blue Ribbon’s northern manager, Chris Richards, said the company was currently focused on exporting mungbeans out of Townsville to a market it had built up over the past eight years.

“There’s heaps of potential up here for more mungbeans, and we’re also looking at chickpeas.”

The Burdekin can produce two crops of mungbeans a year, one planted in August-September, and the other planted in February-March.

Mr Richards said mungbeans were well suited to the Burdekin, where irrigation ensured a profitable crop, especially at current prices of around $1100/t.

“Mungbeans are good for farmers to plant in a rotation with sugarcane, and they can grow two crops in one year because each one only takes three months to grow.

“If cane is in for three to seven years, pulses are an ideal crop to grow in the off year.”

Mr Richards said soybeans and maize also had potential as summer crops in the Burdekin, with soybeans in particular well suited to coping with wet-season conditions.

The Port of Townsville is about to embark on a considerable expansion program which includes the widening of sea channels to allow access for larger container ships.

Port of Townsville Limited’s manager of trade, Maria James, said the importing of equipment for a host of large-scale solar farms was making more than enough 40-foot containers available for backfilling for export.

“We have eight operating berths, and when the upgrade of Berth 4 is completed, four will be able to handle containers.”

Ms James said Townsville was one of the most diverse ports in northern Australia, with more than 30 different commodities going over its wharfs.

“We are still predominantly a mineral export port, but in terms of agriculture, we are the biggest bulk sugar exporter in Australia, with more than 2 million tonnes exported last year, we export around 200,000 head of live cattle each year, and containers are our fastest-growing sector.

“We understand we need to facilitate an efficient, cost-effective northern system to compete with the logistics chains in southern Queensland, and that’s what we’ve set about doing.”

Container port activity is measured in twenty-foot equivalent units (teus), and Townsville peaked at 62,000 in 2014/15 before dropping a little in the past year or two as a result of the downturn in the mining sector.

Container movements are now set to climb back up.

“About 75 per cent of our trade is with Asia, and we have the fastest container service to Shanghai at 10 days.”

Shipping line ANL started operating out of Townsville two months ago, alongside competitors PAE Mariana and Swire, and the wharves are serviced by two stevedores, TBSH and NSS.

“We are already shipping product which we can pull from Cairns to Clermont to Mt Isa, and we can get triple road trains straight to the wharf.”

A facility currently being built on the Central Highlands is eyeing the prospect of being able to truck three full 20-foot containers packed with sorghum, wheat or pulses to Townsville via Charters Towers on a triple road train, and bring back six empty containers from the port.

“The advantages of triple road access to Port can be seen in live export, as it means one driver can bring in 200 head on a triple, compared with other ports to the south where a B-double can only bring in around 120 head.”

In 2014, SunRice bought Blue Ribbon’s mill at Brandon in the Burdekin region, southeast of Townsville.

The mill was built in 2008, and processed 2000 tonnes of locally grown rice in 2013; it also processes and packs pulses for its previous owner.

Apart from some tonnage which goes to the United States and the United Kingdom via Brisbane, where more attractive freight rates to non-Asian destinations are available, Blue Ribbon pulses are shipped through Townsville.

The company is currently evaluating the possibility of exporting chickpeas sourced from Queensland’s Central Highlands, which until now have been exported mostly via Darling Downs container-packing facilities and the Port of Brisbane.

“Townsville has come a long way since we started using it; its port services have improved, and containers have gotten cheaper,” Mr Richards said.

Rise on the rice

After securing $4 million through the Federal Government’s Rural R&D for Profit program, SunRice, its subsidiary Rice Research Australia, and partners have commenced tropical rice research in Queensland as part of their work in developing a sustainable rice industry in northern Australia.

According to SunRice, research has shown that breaking the sugarcane monoculture with another crop can increase can yields by 20 to 30 per cent, and SunRice is actively promoting the addition of rice to the legume-cane rotation to bolster cash flow, improve soil, and break disease cycles.

The crop can be grown in North Queensland’s wet and dry seasons, and SunRice is offering cane growers starting out with the crop everything from agronomic support to marketing capability.

SunRice has already made capital improvements at the Brandon mill in its bid to build a long-term sustainable rice industry in North Queensland.

This has included the addition of rice-paddy drying silos, a new packing line to produce 20 kilogram packs of branded North Queensland Rice for the foodservice industry, and a new huller and colour sorter.

SunRice said these and other investments were expected to strengthen the company’s ability to target premium export markets.

Depending on the growth of the North Queensland rice industry, SunRice said it would be assessing the potential to export rice out of the Port of Townsville, although this was likely to be several years away.