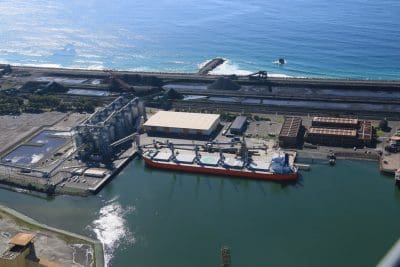 Quattro operates an export grain terminal at Port Kembla in southern NSW, and uses methyl bromide to fumigate grain in the silos.

The company holds an environment protection licence issued by the EPA, which places strict conditions on the use of methyl bromide for fumigation, including air emission limits, operating, monitoring and reporting requirements.

On June 7, Quattro Ports exceeded its licenced methyl bromide limit from a silo, which triggered an alarm on site.

Quattro did not respond to the alarm as the premises was unstaffed, and the EPA has said this breach of the limit continued for seven hours until staff arrived on site in the morning.

In another fumigation incident on June 20, Quattro Ports again exceeded its licenced methyl bromide limit, but for a much shorter period.

The EPA has issued a $15,000 fine for failing to operate the fumigation system properly.

In addition, the EPA has required Quattro Ports to engage an independent auditor to audit their fumigation activities under the terms of a pollution reduction program.

EPA manager regional operations Illawarra, Peter Bloem, said Quattro has an obligation to protect the local community and the environment and comply with its environment protection licence.

“Methyl bromide is hazardous to plants, animals and people. It is also an ozone-depleting substance. For these reasons, its use requires vigilant management by staff.”

Mr Bloem said while the environmental impacts of Quattro’s breaches were not significant, the enforcement action is a reflection of risks posed by methyl bromide use and the need to ensure fumigation complies with licence requirements at all times.

The enforcement action follows a fine of $15,000 issued to Quattro Ports in July 2016 after exceeding its licenced methyl bromide limits in April 2016.