THE QUATTRO grain terminal at Port Kembla has hit its straps in 2017 thanks to a big shipping program from two if its shareholders, Cargill and COFCO Agri, and support from other entities including Narromine-based trader Agrigrain. 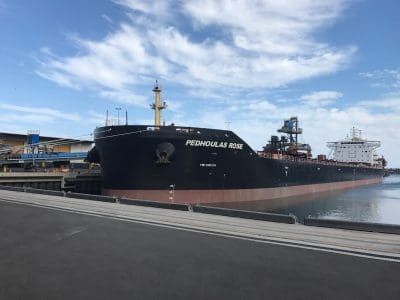 This vessel loaded 65,000 tonnes of canola for Cargill last month, making it the biggest cargo to date to sail from Quattro’s terminal at Port Kembla.

Opened for receivals in January last year, the terminal can outturn 150,000 tonnes per month, and its manager Dene Ladmore said the Quattro terminal was well and truly doing its bit to relieve grain storages of barley, canola and wheat from the 2016 harvest and supply the export market.

“It’s been very busy since January this year and we’ll be busy for the rest of this financial year; we’re doing 100,000 tonnes plus a month,” Mr Ladmore said.

Qube and Emerald Grain are the other partners in Quattro Ports, and Qube’s role as a provider of bulk haulage to ports has helped Quattro become a competitor to GrainCorp, the operator of Port Kembla’s only other bulk grain facility.

“Most of the grain we take in comes by rail; only about 15 per cent is delivered by road.”

“We wanted to develop a country-to-port model that was competitive with the current option available at Port Kembla, and including rail was an important part of that.”

The largest shipment to date from the Quattro berth was 65,000t of canola loaded for Cargill last month in a Panamax vessel.

Added to a 25,000t shipment of barley, Agrigrain’s 37,000t of wheat, and 60,000t of wheat for COFCO Agri, this made use of the terminal’s maximum outturn capacity for the first time.

“Our unit holders COFCO and Cargill are a big part of our move forward, but we’re not just in the market for our owners; we’re open to all customers.”

The Quattro terminal loaded its first shipment in March last year, and since then has increased the draft at its berth to 14.5 metres, and length to 225m.

The terminal is also receiving bulk imports of fertiliser.

Apart from Port Kembla, Newcastle is the only other bulk grain port in NSW.

Newcastle has two grain export facilities, the GrainCorp terminal and the Newcastle Agri Terminal (NAT), which opened in 2013.

Louis Dreyfus operates a storage at the Port of Newcastle which is connected to berths via a conveyor.