THE ESSENTIAL Services Commission of South Australia (ESCOSA) is not expected to present its final report on grain bulk-handling costs before October. 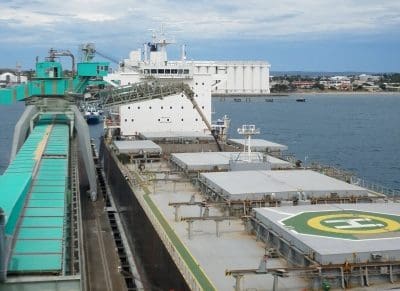 “It’s complex work, and we’ve always maintained there needs to be transparency and we are waiting to see ESCOSA’s view on that,” Ms Rhodes said.

“The report will be provided to the new Marshall Government, and GPSA looks forward to working with it to form policy to make sure the value of South Australian grain is maximised.”

Terms of reference require ESCOSA to look at South Australian bulk grain export supply chain costs over the past 10 years as Part 1 of the inquiry, and if these costs are identified as inefficient, Part 2 requires the commission to provide options to address them.

ESCOSA was initially required to submit its draft report on costs over the past decade within six months of the inquiry’s commencement, and provide a final report on Part 1 and, if required, table Part 2 within three additional months.

The South Australian Treasurer has since advised ESCOSA that its draft report, or Part 1, must be provided by 30 June 2018, and the final report including Part 2 is to be lodged by 31 October 2018.

ESCOSA has received the extension to give it time to consider further evidence and information, namely the evidence and findings of the Australian Export Grains Innovation Centre (AEGIC) report into supply-chain costs across Australia.

This was expected to be released in March 2018, but AEGIC this week said the report did not as yet have a revised release date.

The extension has also been granted so ESCOSA can consider the evidence and findings of the final South Australian Parliament’s Economic and Finance Committee Inquiry into Primary Producers report released in November 2017.

GPSA last year said the inquiry into SA bulk grain supply chain costs was great news for growers, and that promoting storage and handling competition was a key element of GPSA’s policy.

One earlier submission to the inquiry said costs at the key SA export point of Port Adelaide were $17 per tonne above those at CBH Group’s Kwinana terminal in Western Australia.

While the Glencore company, Viterra, is South Australia’s only operator of bulk grain export terminals, at least two other companies are using mobile ship loaders at Port Adelaide to load grain cargoes.

The Eyre Peninsula is one of Australia’s key grain-exporting regions, and T-Ports is building its own grain export terminal in time for the 2018 harvest.

Ms Rhodes said this and other investments, including growers expanding their on-farm storages, were signs of confidence in the state’s diversifying supply chain.

“That will bring competitive tension to pricing, and sends a really clear signal to private investment that the industry is maturing post-deregulation.”

“We can then talk to government about maximising opportunities for our export supply chain, and there’s a lot of interest in it, which GPSA welcomes.”