DATA released this week by the Australian Bureau of Statistics indicate a succession of Panamax vessels laden with Australian canola is making its way to European crushing plants, which once again are likely to absorb the bulk of Australia’s canola export surplus. 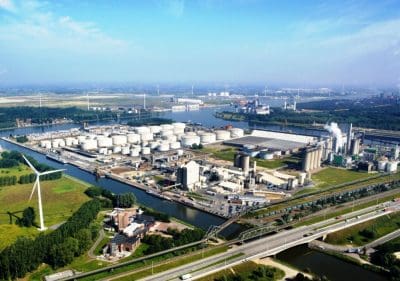 Crushing plants like this one in Ghent in Belgium are volume users of Australian canola.

European destinations took 450,371 tonnes, 96 per cent, of the 468,785t of Australian canola exports in November and December, in the early months of the new season shipping period. (Table 1).

“Europe is still our Most Favoured Nation, and China is starting to re-emerge on the horizon as a market with possibilities.”

Eastern Australia consumes around 900,000t of canola annually, and Mr Goddard said NSW, Victoria and South Australia were likely to have a current-crop export surplus of a similar size.

“Our crop turned out larger than expected. Early on, we were thinking we would have struggled to meet east-coast demand, but now we’re looking at a surplus of 1 million tonnes (1Mt) from eastern states and South Australia.”

Mr Goddard said higher-than-expected yields in Victoria and southern NSW have generated much of the surplus.

“Northern NSW was very patchy, but closer to the Victorian border, and in Victoria, the crop came home strongly.”

Western Australia also produced more canola than initially expected, with its Grain Industry Association of WA forecasting 2017/18 production of 1.77Mt, nearly all of which will be exported.

Mr Goddard said factors including soybean production outlooks in the US and South America, and China’s tariff on dried distillers’ grain, as well as Canadian pricing of GM canola, would all impact on China’s interest in Australian canola.

“We will be competing head-on with Canada in the GM, but if we are looking at a higher-value targeted non-GM market, we can supply that too.”

Europe primarily uses Australian canola as an environmentally friendly biodiesel feedstock, and its status into 2018 has been confirmed following an Australian industry submission.

With chickpea prices currently drifting lower, industry sources said they believed growers in northern NSW and pockets of southern Queensland could be expected to plant more canola and less chickpeas in 2018.

“It depends on how much rain we get between now and planting, but we know there is increased interest in growing canola in the north.”

In response to this, AOF has organised a Northern Canola Training Day in Moree on Thursday, 22 February to help growers access the latest agronomic advice.