AUSTRALIAN canola growers and traders gearing up for new-crop exports to the European Union stand to reap significant rewards from a new trading process. 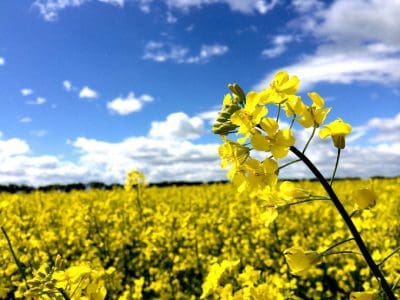 A central office for Australian canola aimed at the European biodiesel market will simplify administration for growers and traders. Photo: Nuseed Australia

Announced this week and known as  Sustainable Grain Australia, it has been designed to simplify the sustainability certification process for Australian canola destined for the EU biodiesel market.

The essence of the new process is that growers wishing to trade canola destined for Europe can now do so under a “central office” using one common declaration form, but retain the flexibility to sell through existing buyers.

Europe is the number-one export market for Australian canola, and EU legislation requires all traded canola to meet strict sustainability requirements if the canola is to be used for biodiesel.

Australian Oilseeds Federation chief executive officer Nick Goddard said the compliance cost of meeting these requirements was significant, and was felt across the whole Australian supply chain from growers to exporters.

“This new process reduces the paperwork and audit burden growers currently face, while also reducing the overall supply-chain costs associated with the large number of on-farm audits that have to be undertaken,” Mr Goddard said.

ADM, Bunge, Cargill, Centre State, Glencore and GrainCorp are among the major exporters of Australian canola to Europe, and have worked collaboratively with the AOF and Commodity Inspection Services over the past two years to develop and implement the new process.

Integral to it is the ability for a grower to now complete their common grower sustainability declaration within the myNGR system.

Mr Goddard said growers now need make their sustainability declaration once, and it is then stored securely in their NGR records.

“If a grower wishes to trade canola with one of the participating trading companies, the sustainability declaration will be available for access by the trader or exporter from within the myNGR system.”

Wimmera-based grower Julia Hausler said the new process will significantly reduce the amount of paperwork growers need to complete, and will make the trading of canola destined for the European market easier.

“In the past, we would have had to complete a separate declaration form for each buyer we sold to, and be subjected to on-farm audits, potentially one for each trader,” Ms Hausler said.

“Now we simply complete one form online through NGR, and have the potential for just one audit.

AOF has led the development of the central office, and has received accreditation from Control Union, confirming that it meets the strict requirements laid down in EU legislation.

The AOF has contracted Commodity Inspection Services, which developed the quality system on behalf of the AOF, to undertake day-to-day management of the central office.

“As far as we know, no other canola supplier into the EU has developed a central-office model, the overall savings from which should help Australian canola maintain its competitiveness in the global market,” Commodity Inspection Service national business manager James Saunders said.

“From an industry perspective, it’s a great benefit to have a common declaration held in a central repository, while the overall savings in audit time should enable the industry to save valuable time and money,” Mr Freebairn said.

Mr Goddard said he believed the central-office  system could form the basis for a sustainable grain-trading process for other commodities such as barley and wheat as well as canola.

“The sustainable grain-trading framework is now in place for canola, and it should be relatively easy to adapt to other commodities for other recognised sustainability-certification schemes,” Mr Goddard said.

The new process will operate for the coming harvest, with the reduction in audit numbers beginning to flow through from next year.

The process is open to all traders wishing to operate under the AOF Central Office, as well as growers across the country.