PRICES for old and new-crop chickpeas have hit new highs of $800 per tonne or more delivered to up-country packers as traders react to the prospect of a very small 2018 crop which will start to make its way to market by the end of next month. 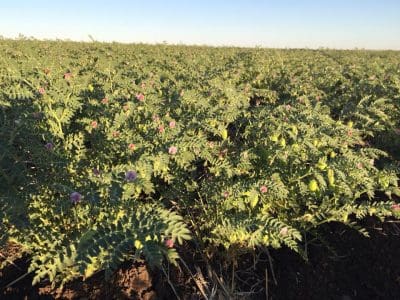 Australia’s healthiest 2018 chickpea crops, like this one at Clermont, are growing in Central Queensland.

AGT Foods CEO, Peter Wilson, said the prices had failed to attract volume selling from growers who, with the exception of parts of Central Queensland, were expecting below-average yields.

“We sowed this crop deep into moisture, but we didn’t sow into deep moisture, and the fact that we’re not getting a lot of in-crop rain means the crop is developing under moisture stress,” Mr Wilson said.

Pulse Australia last week forecast Australia’s 2018 chickpea crop at 300,000 tonnes, less than one-third of last year’s volume, and traders have said the figure has sparked a round of trader selling as some in the market look to cover short positions or square up their books.

“The real story is we don’t have a lot of old-crop left, and we know the new-crop is under enormous pressure.”

With a jump of around $100/t since the Pulse Australia forecast was released, Mr Wilson said bids at current levels put the market at US$70-$80/t above the Pakistan cost and freight (CFR) market.

“These price levels are academic for new crop, because we’re not seeing much of farmers engaging, and I don’t believe there’s any significant volume being sold on a CFR basis.

“We are way above export parity today, and if a heap of product came out of storage, that market would drop.”

“There’s a lack of sellers in old-crop, but I do think there’s still of old-crop chickpeas around.”