AUSTRALIA’S wheat quality and proximity to Asian markets are key competitive advantages in the changing global wheat market, where exports from Black Sea ports are already making their way into some of Australia’s key markets including Egypt and Indonesia. 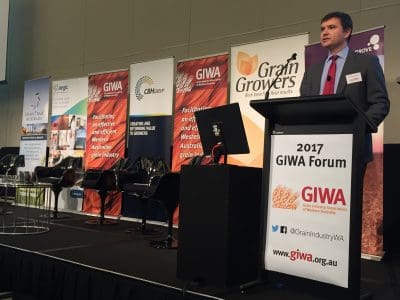 That was the message from Kernel Holding’s chief operating officer, Konstantin Litvinksy, in his address to the Grain Industry Association of Western Australia forum earlier this month.

However, he said demand for supreme quality wheat, the likes of which Australia could supply, was likely to grow consistently, aided by Asian urbanisation, which was growing fast in a market with plenty of opportunities.

In the past 20 years, wheat exports from Russia and Ukraine have risen from less than five million tonnes (Mt) combined to a projected more than 18Mt for Ukraine along in 2016/17, with India and Egypt, with more than 2.5Mt each, its biggest markets.

Russia’s wheat exports have also boomed in recent decades, with the country shipping more than 6Mt to Egypt, its biggest market by far, in 2016/17.

“Freight rates were generally favourable in recent years, but there is still a big difference of US$22/t.”

This figure refers to the 2017 cost of Australian wheat shipped to China, Indonesia and South Korea at roughly $10-$15/t, compared with the cost of shipping wheat from Ukraine to those same destinations of $30-$40.

“It is not just about freight; production costs, inland and port logistics are key.”

Mr Litvinsky said Ukrainian wheat was much more competitive than Australian in the areas of logistics, and also fobbing, where the cost of loading a vessel had fallen from $20/t in 2013/14 to $12.50/t in 2017/18 on the back of booming port infrastructure.

Upcoming reforms to Ukraine’s land ownership laws presented investment opportunities, and some growth for the top 10 agribusinesses which hold more than 120,000has each.

He said it was part of the changing profile of Ukrainian agriculture, where hefty investments in farming and logistics infrastructure were seeing an area shift into the most profitable crops: sunflowers, corn and soybeans.

This was creating direct competition to multinational exporters, a development fuelled by Ukraine having its grain infrastructure, with a rail system handling 75pc of its inland grain transportation, expanding faster than its export potential.

Kernel farms more than 600,000 hectares in Ukraine, and produces in excess of 3Mt of grains and oilseeds per annum, as well as procuring more than 3Mt each of sunflower seed and grains from 5,000 farmers.

It has a storage network of 45 inland silos with a 2.7Mt total storage capacity, and exports more than 5Mt of grain

Operates deep-water grain terminals in Chornomorsk and Taman with a combined annual throughput of 6Mt; a second terminal with a 4Mt annual capacity is currently being built in Chornomorsk.