THE latest Australian Competition and Consumer Commission (ACCC) report into bulk-handling of grain has found the domination of the supply chains by Viterra in South Australia and CBH in Western Australia is limiting options for growers and other exporters. 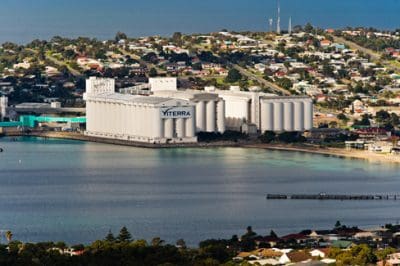 In its 2016-17 Bulk Wheat Monitoring Report released this week, the ACCC has said the development of supply-chain and port facilities in NSW, Queensland and Victoria had, in contrast, created a healthier level of competition to challenge the eastern states’ major bulk-handler, GrainCorp.

In preparing the report, the ACCC fielded submissions from stakeholders, and found that while competition was emerging at some ports, other regions remain characterised by “vertically-integrated near-monopolies”.

“This is particularly the case in in SA and WA, where Viterra and CBH dominate the bulk grain export market supply chains of each state and also compete in the export market.

“Promoting ongoing access for a range of exporters across port zones is also important to offset the current trend of consolidation between existing grain trading operations.”

The report said WA Plantation Resources (WAPRES), had had a “particularly challenging” entry to the WA port terminal market, and Bunge, through its Bunbury Grain Terminal, had also faced difficulties.

“Bunge has found it challenging to pursue an accumulation strategy alongside CBH’s extensive upcountry network.

“The WAPRES terminal does not have rail access, which constrains the geographic region from which Bunge, the port’s primary exporter, can efficiently source grain.

“Where new entrants have commenced operations in SA and WA, they are not currently on a scale that would provide a significant competitive constraint on CBH or Viterra’s operations.”

In its report, the ACCC said it had received “numerous complaints over several years” in relation to the difficulty exporters experienced accessing bulk-handling services at port and along the supply chain.

“In SA and WA port zones where competition has yet to develop, stakeholders expressed varied concerns including a lack of interest from port terminal service providers (PTSPs) to negotiate fees or access terms, leading to uncertainty in relation to total shipping costs and a higher risk associated with shipping from those zones.”

In South Australia, stakeholders noted there was limited competition at the port level.

“The overall network effect of a dominant position at port and upcountry establishes a high barrier to entry that to date has limited the emergence of competition in upcountry storage, transport services or at port.”

While PTSP entrants at Port Adelaide have provided new opportunities for some growers and several exporters within the zone, these operations rely on access to Viterra’s storage network, or in the case of LINX, a limited number of SA GrainFlow sites.

In WA, CBH operates all bulk wheat port terminals other than the WAPRES Bunbury facility.

Code could be improved

The ACCC said it believed improvements could be made to the Port Terminal Access (Bulk Wheat) Code of Conduct to increase its effectiveness in promoting competition, and this could be made following its review by the Department of Agriculture and Water Resources.

“Despite emerging competition at some ports over the last four years, the ACCC does not consider that fair and transparent access to bulk grain export services across Australia would be assured in the absence of the Code,” the report stated.

“Without fair and transparent port access, exporters may reduce their participation in export markets, reducing the marketing options for growers and ultimately the price that they can secure for grain.”

To promote competition between exporters, the ACCC said it believed “an appropriate level of regulation” needed to be applied to entrenched vertically integrated regional monopolies.

In port zones where choice across the supply chain had emerged in storage, handling, freight and port terminal services, growers and exporters alike had benefited.

The Essential Services Commission of South Australia (ESCOSA) is conducting its own inquiry into the South Australian bulk grain export supply chain costs, for which the terms of reference had been further varied this week.

The draft report is to delivered to the South Australian Treasurer by 30 June, 2018, and the final report is due by 30 September, 2018.

In a statement, ESCOSA said the variation will provide the opportunity for it to consider further evidence and information relevant to the inquiry.

This includes evidence and findings of the Australian Export Grains Innovation Centre report into supply chain costs across Australia, due for release in  February 2018, and material in the final report from the South Australian Parliament’s Economic and Finance Committee Inquiry into Primary Producers final report, which was released last month.

At least two entities, Eyre Peninsula Co-operative Bulk Handling Ltd and FREE Eyre Limited, are looking at developing bulk-handling and port facilities on the Eyre Peninsula to offer an alternative to Viterra’s services in this key export region.