GRAIN PRODUCTION is on the rise in the Black Sea and Russia, and two industry specialists on the subject will be sharing their insights into how this is affecting global markets at the Australian Grains Industry Conference (AGIC) 2019. 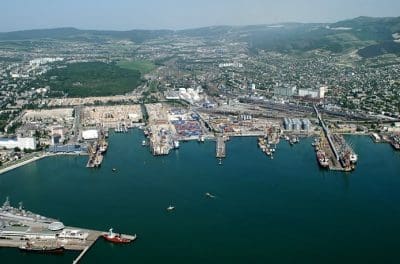 The Black Sea port of Novorossiysk is one of Russia’s key exporters of grain.  Photo: VesselFinder

In a session entitled Shifting Tides, UkrAgroConsult founder and director general Sergey Feofilov and S&P Global Platts head of Asia-Pacific agriculture Andrei Agapi will look at some of the ramifications of the changing global grain-trade landscape.

Mr Feofilov established UkrAgroConsult as Ukraine’s first analytical agency specialising in agriculture, and will be speaking on the topic of Black Sea Grains: Ambitions and Challenges in Russia and Ukraine.

He said wheat had traditionally been the main crop of Black Sea farmers, but increasing competition within and beyond the region had prompted the need for specialisation.

Recent global figures have already proven the impact of the Black Sea and Russia.

“Ukraine turned into the main corn exporter on the Eurasian continent, even throughout the Eastern Hemisphere,” he said.

“Russia has strengthened its position in the wheat market, pushing the United States out of the top position and becoming the world’s number one wheat exporter in recent years.”

Mr Feofilov said Ukrainian farmers were almost completely self-financed and self-reliant, with a “great deficit” of government support, and this was prompting them to grow crops with improved margins. “This year, Ukrainian farmers made their decisions realising the after-effects of both bad weather and a reduction of corn area in the US.

However, he said profitability and margins in 2019-20 would be affected by the increased global grain production.

“Prices continue to decline and the farmers’ margins of growing all kinds of grains and oil crops will likely decrease compared with last year.”

For Black Sea countries, Mr Feofilov said the profitability of wheat and rapeseed would be down on last season, but higher than that of maize, soybeans and sunflower.

“This season, despite the expected decline in maize profitability and other factors…Ukrainian farmers have decided to expand maize area in 2019.” Mr Agapi will be speaking on the topic of the bull wheat market and how South-east Asian buyers are adjusting to competitive prices, including those offered by shippers sourcing grain from Russia and the Black Sea.

Mr Agapi has extensive experience in physical commodities markets, and their relationship with financial markets and global trade flows.

He headed development of the Black Sea wheat and corn markets for Platts, which led to the creation of cash-settled futures contracts.

The Rising Tides session fits in with the theme of AGIC 2019, Navigating the Future: Roadmap to 2025.

The conference will be held at Melbourne’s Crown Promenade on 31 July and 1 August.

GRAIN Trade Australia (GTA) has opened registrations for people involved in grain to take part in a workshop in Melbourne on 30 July on advisory and compliance issues as part of GTA’s commitment to training and development.

The workshop will address the value of reputation to businesses, and look at how a reputation can take years to build but be destroyed in a day.

It will include involvement with Pizza Hut chief legal counsel Joanne Moss in an interactive and practical session which looks at how to manage reputation and catastrophic risk.

The program will also look at insolvencies, managing risk in drought, and discussion on aspects of Australian Financial Services License obligations, and will involve trader and producer presentations and discussions around compliance.

Legal scenarios and market responses will be discussed by specialists in those fields.

Prior to their appearances at AGIC, international panelists UkrAgroConsult director general Sergey Feofilov and US-based analyst Dan Cekander will give the workshop their perspectives on managing counterparty risk and hedging.

The workshop will run from 9am to 5.30pm, Tuesday 30 July at Karstens conference venue, 123 Queen Street, Melbourne.