On the consumption side, forecasts are also up compared with last year. Maize end-of-year stock is expected to decline by 50 million tonnes (Mt).

The latest IGC report has cut its 2019/20 forecast for total grain production, which comprises wheat and coarse grains, to 2148Mt, down 8Mt from the June estimate.

This cut factors in downgrades for wheat production in origins including Canada, the European Union and Russia, maize in China and sorghum in the United States.

The global 2019/20 wheat crop is now forecast at 763Mt, still a record despite the latest cuts, while the maize crop is expected to be the second-largest ever, and barley production is seen as the highest in a decade.

Because of smaller stocks at the start of the season, overall grains supplies are predicted to hit a four-year low.

Consumption is seen reaching a new high of 2184Mt, up 1 per cent year on year, which includes gains for food, feed and industrial uses, but down 3Mt from the June estimate.

A third successive contraction of global stocks is forecast at the end of 2019/20, with the rate of drawdown accelerating to 36Mt.

This entirely reflects tightening maize inventories, down 50Mt year on year, while carryovers of other grains are forecast to expand, including of wheat (up 9Mt) and barley (up 3Mt).

The anticipated drop in maize stocks is centred on China, down 26Mt on 2018/19, for which supply and demand assumptions are highly tentative.

Of note to the global market is the US maize carryover, which is projected to shrink by 18Mt over the year to a six-year low.

World grain trade is projected to climb by 1pc over 2019/20, and shipments of wheat, barley, sorghum and oats are expected to rise, but the first fall in maize trade in 11 years is foreseen, led by reduced EU buying. 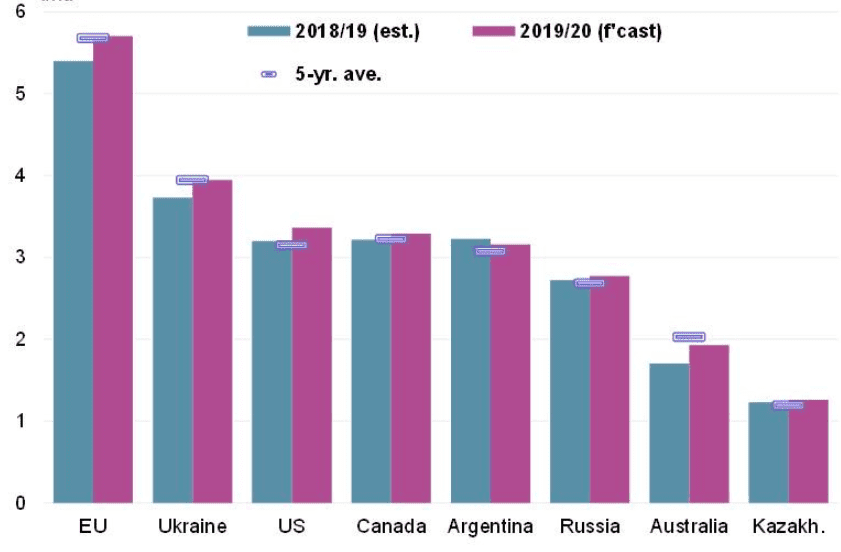 The record wheat crop in 2019/20 is projected at 763Mt, and though EU yield estimates have been cut by a dry late spring and early summer, IGC has predicted higher yields for most major exporters, forecast to lead to a sharp increase in the feeding of wheat to animals in 2019/20.

IGC saw world oat trade increasing this year by roughly one third, with Japan remaining as a significant customer, and the US and China increasing, based largely on restricted supply of corn to satisfy feed demand. Barley trade and consumption is expected to recover from the 2018/19 five-year consumption low, but gains might be tempered by ready availability of alternative feed ingredients including wheat, and uncertainty about future demand from China and Saudi Arabia. 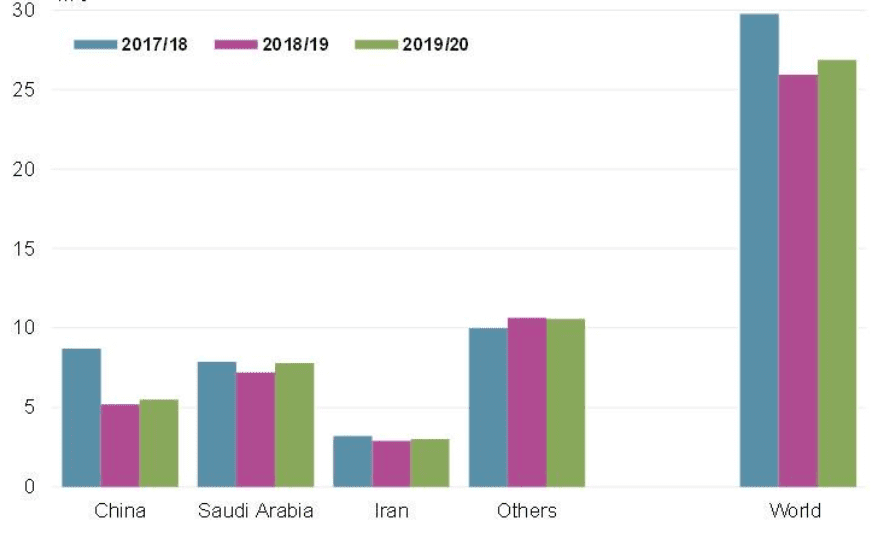 After successive monthly gains, the IGC grains and oilseeds price index comprising wheat, maize, rice and soybeans dipped by 2pc in July, pressured by a seasonal increase in supplies and strong competition for exports.

The wheat sub-index, weighed by seasonal harvest pressure and overall lacklustre demand, has dropped by 5pc since the previous report.

View the interactive index graph on the IGC website here. You can also link to the other sub-index figures.