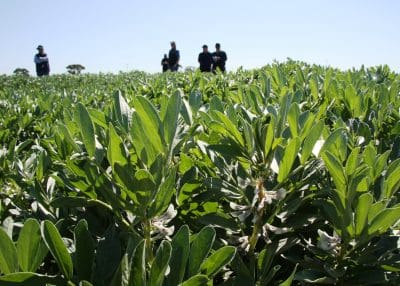 AUSTRALIA’S faba bean crop now being harvested is expected to total 338,400 tonnes, up 12 per cent from the previous estimate released in August of 303,400t, and up 10pc on 2018 production, according to the latest figures from Pulse Australia.

The faba bean harvest has started in New South Wales and northern growing areas of South Australia, while the harvest of high-yielding crops in the Wimmera, and in south-east SA, is expected to start next week.

Associated Grain senior trader Mostyn Gregg said demand from the Middle East was likely to absorb most of Australia’s new-crop faba beans, but some would trade locally.

“Generally speaking, fabas sold for feed trade in an over-the-fence market, and there will be some of that,” Mr Gregg said.

Faba beans are a preferred protein source for stockfeed millers, but have priced themselves out of the market, as they are now selling for $450-$500/t, more than double their historic average price.

On the export front, Egypt buys on average around 70pc of Australia’s exported faba beans, and demand from Egypt and other offshore markets kicked the price up to more than $1100 on-farm earlier in the year.

“That was before the market fell off a cliff when European fabas came on to the market.”

This year, good crops were harvested in the Baltic States and the United Kingdom, where harvest is now over, and European tonnage was forward sold into Egypt and other markets from April onward.

Mr Gregg said destination buyers were wary of committing to volume purchases at this stage after last year’s volatile market, and fabas might price themselves into the volume domestic market in the second half of 2020.

“If faba bean prices get low enough, they will probably get gobbled up in the domestic feed market.”

Field peas and lentils can also price themselves into the stockfeed market but, as with fabas, resurgent demand from human-consumption export markets has made them hard to justify in feed rations.

Weather-damaged old-crop lentils have been a useful additive for feed millers, but stocks are dwindling as the harvest of new-crop lentils gathers pace in SA and Victoria.

While their nutrient profile is not as complex or attractive as faba beans, field peas, lentils or lupins, their price is much more attractive to stockfeed millers and pellet manufacturers who are already paying historically high prices for grain.