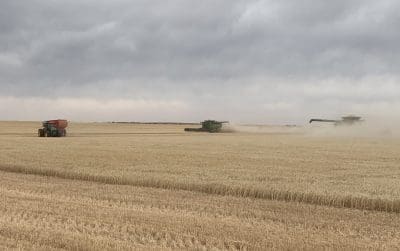 WHILE wheat prices are showing no signs of easing, new-crop barley prices have dropped a few dollars per tonne in the past week to levels which are buying domestic slots in eastern Australia and exciting some export interest.

Riordan Grains trading manager Mark Lewis said cool weather, patches of rain and ample servicing from Victorian as well as New South Wales contract harvesters had made for a steady and orderly harvest to date.

“There are tonnes flowing everywhere, and farmers seem to be filling their on-farm storages first, then taking a load into the depot,” Mr Lewis said.

“Harvest is not rushing at us.”

While yields in much of the northern Mallee have been well below average due to a dry spring, yields in other districts of Victoria are good, and getting better as harvest moves south into the Wimmera.

Mr Lewis said the barley market appeared to have found a floor.

“It’s close to be getting some export demand, and it’s a wide enough spread to wheat for the domestic market to be interested.”

Excellent quality and above-average protein are prevalent in the wheat and barley harvests so far in Western Australia, South Australia, NSW and northern Victoria.

In NSW and Victoria, wheat is attracting strong bids from millers keen to cover their requirements out as far as new-crop 2020.

In WA barley particularly, high protein is pushing considerable tonnage out of malting segregations and into feed.

This may put supply-side pressure on the feed barley market, and lift the premium for malting over feed.

Many growers in the Mallee have finished their barley harvesting, and are moving into wheat, which has been slow to hit the market in volume.

“The bigger wheat crops we’re not going to see for the next couple of weeks and on barley, the farmer coming out of harvest one-third sold on barley might be where it lands.”

In Victoria, prompt feed barley ex-farm in the Mallee is sitting at around $240-$250/tonne, while the January market is $255/t on-farm and $280/t delivered Melbourne.

The January delivered-Melbourne wheat market is around $340/t.

In the northern market, sorghum for November-December delivery to Darling Downs consumers is trading in the mid $420s/t delivered Dalby, with the buoyant market reflecting limited supplies of local grain of any kind.

“Most growers have sold, and there’s not much of anything left on the Downs,” Alliance Grains principal Luke Walker said.

The arrival of boat barley and wheat from WA and SA from January onward is expected to quash consumer interest in sorghum, which at present is coming largely from poultry and pig producers, and also the Dalby Bio-Refinery.

The Brisbane free-on-truck (FOT) market is currently at around $365/t for barley and $415/t for wheat, and $15/t less for both grains in the January market.

Underlying demand is expected to stay strong and support prices at current levels for as long as the drought continues.

“We’re the dearest barley in the world delivered Downs.

“We’re just in a weather market; while it doesn’t rain, the feedlots stay full.”

Only 100 millimetres or more of rain across southern Queensland and all of NSW could soften the market in the foreseeable future by allowing pasture feeding to return as a backgrounding option for the beef cattle industry.

The dire drought situation in northern and central NSW has seen graziers from the New England to the South-West Slopes drastically reduce sheep and cattle numbers.

Patchy rain has fallen in northern NSW in the week to today, with Armidale on 33 millimetres, Glen Innes 46mm, Mungindi 27mm and Narrabri 34mm being among the highest registrations.

Given the parched landscape, much more is needed everywhere to get farmers and graziers into recovery mode.

The lack of bore and surface water has been the deciding factor for many producers, who cannot justify the cost of buying in drinking water for animals on top of fodder and grain costs.

Mixed farmers, mostly in the southern half of NSW, are value-adding their own grain and hay by feeding what stock they have left.

However, they are not stepping into the market in the same way they were last year.

“There is going to be a fair bit of wheat and barley turn up in Brisbane on boats from January, and the FOT market from trains coming into Moree will make grain a bit more affordable in northern NSW,” Mr Dorney said.

The rail market will bring wheat and barley from Victoria and eastern SA to railheads from Parkes to Moree to provide, as they have through the past 12 months, a cheaper option than sourcing boat wheat ex Newcastle.

“Growers of barley are wondering why it’s not worth more than it is at the moment, but there just aren’t the animals to feed up here.

“A lot of people have run out of water and money.”

“The crop’s not getting any bigger, although some storms were about earlier in the week in northern NSW,” Mr Steele-Park said.

ASX wheat and barley markets traded around 1pc firmer during the week.

Trade volume was 50 lots in the January contract. Open interest fell to 2640 lots from 2690 at the beginning of the week.

The majority of the wheat transactions this week were off-screen trades, exchange for physical (EFP). At harvest time it is likely these transactions can be attributed to end-users dealing out of swaps or futures hedges as they take delivery of physical product.