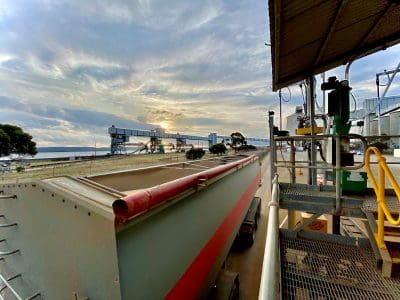 BARLEY has recorded its first price hike for some weeks, with the trade reporting the writing of as much as 150,000 tonnes of export business to China since Monday behind the lift.

In the feedlot-driven delivered Darling Downs market, barley traded on Tuesday for July-September at $360 per tonne, with today’s market for the same period bid at $363/t and offered at $370/t.

The prompt Melbourne market is up around $5/t on the week, and the Western Australian market has lifted $10/t.

Given the tight supply-and-demand situation in eastern states because of the drought-hit New South Wales and Queensland crop harvested last year, trade sources have said WA is the likely origin for the latest export business.

Today, the WA prompt barley free-on-board market has jumped around $10/t this week, and is sitting at around AU$314/t, or US$203/t, a level the trade thinks is enough to be buying export interest.

“The barley market in Australia has fallen about $50 in a month, which is unsustainable,” another trade source said.

“This is the first rise we’ve seen in a while.”

Delivered Downs wheat is trading at $430/t for April plus carry, but little volume is being done with most end users well covered with recently booked barley in the short term.

China is officially not buying Australian feed barley while its investigation into historic pricing continues, but Australian Bureau of Statistics figures show 31,500t in December and 33,000 in January was shipped.

As China deals with a lack of labour in its supply chain because of the COVID-19 lockdown, bulk shipments appear to be an attractive option for the struggling giant.

It has recently bought multiple cargoes of US sorghum, and trade sources say this can sometimes go hand in hand with its buying of feed barley as it looks to replenish its grain stocks.

China has been a volume buyer in the past couple of months of wheat from a number of origins including Australia.

Trade sources estimate Victorian and South Australian farmers have sold around 85-90 per cent of their barley and wheat, so grower-driven supply-side pressure has pretty much evaporated for the season.

“The buyers pushed their bids to the downside, and now they’ve had to lift them to get some business.

“The dollar coming off has helped.”

“Wheat prices didn’t suffer the same kind of dramatic fall as we saw in barley.

“The market has had more of an appetite for wheat all the way through.”

Mr Knight said grower selling of current-crop has been tied to truckloads of grain to pick up a backload of fertiliser in readiness for planting from next month.

“Growers volumes have dropped off in the past few weeks.

“They aren’t falling over themselves to sell what they’ve got left.”

The trade also appears to be conservative in its approach given global uncertainty which has offset reasonably bright prospects for the planting of Australia’s winter crop.

“You could say the trader wants to have smaller positions and be more nimble.”

Little is happening in the new-crop barley market, which is offered Downs for January at $280-$285/t and getting few bids, as consumers wait to see how new-crop planting prospects pan out next month and into May.

“It’s tempting, but we’ll sit out for a bit longer,” one consumer said.

“Cattle prices keep going up, the dollar’s going down, and we’ve got coronavirus on top of that,” a consumer said.

“We have so many potential production factors moving.”

The January new-crop market for wheat is moving within the trade at around $315/t.

In the new-crop delivered-Melbourne market, barley is trading barley $275/t delivered, while wheat is changing hands at $320/t.

Most of the new-crop action is between traders.

In the sorghum market, the June-July price for new-crop delivered Mt McLaren depot is $299/t today, up around $5/t on the week.

CQ Commodities broker Jodie Wade said the Mackay track market has been bouncing around in the $310-$325/t range in recent weeks, and talk about interest from China had pushed it to the upper limit, with values jumping $4/t today.

Mrs Wade said domestic demand may be enough to consume the crop now in the ground in CQ which is in variable condition depending on rainfall.

“Some of it could do with a drink of water.

“Not all of the trade is sure there will be enough to go export.”

All of the reduction has come from the stockfeed sector which is expected to consume 5.2Mt this year, down from 5.7Mt last year, when drought feeding of livestock including custom-feeding of cattle was prevalent.

Australian trade sources are somewhat alarmed at the pace of Australian wheat and barley exports, and estimate Australia will have shipped out 5.7Mt of wheat from October to April.

This gives an average monthly shipment of 800,000t, a figure which is close to double what appears to be available for shipping from May to September.

“As of the end of March, WA and South Australia are not going to have a lot left, so I don’t know where it’s going to come from,” one trade source said.

Cottonseed is scarce, no doubt, but sellers’ ideas in the mid-to-high $500s a tonne for 2020 crop cottonseed are failing to ignite buying interest.

“Next year’s nominal values are say $340/t ex Moree and Namoi valley 340 and similar for places like Mungindi, gin spread 2021.

“Crop size next year is hard to predict but on current conditions it could be 1.5 million bales, which would equate to around 375,000t of seed, mostly in Queensland and in the border regions of Qld/NSW.

The crop size could increase if rain were to bring water flow into NSW dams over the winter months.

Barley on the ASX strengthened $3/t over the week and WM wheat contract weakened $2/t. Across both contract types total volume was 380 lots, all wheat in the January 2021 contract.

Wheat open interest fell to 6355 in January 2021 at the close of business yesterday, from 6480 contracts a week earlier and barley open interest was unchanged.