FEEDGRAIN buyers in eastern Australia judiciously are maintaining their strong buying stance as they face world markets which refuse to go down and as southerners fear Mallee and Wimmera region dryness is dusting up Australia’s otherwise optimistic start to the winter cropping season.

Nearby values in the south for wheat and barley firmed this week by about $5/tonne, but new crop bids reflected forward risk and uncertainty as Melbourne values advanced by $15-20/t.

Wilken Grains’ Andrew Kelso said corn was the driver of this market.

Values in Australia remained firm for a variety of reasons including export sales and early-season dryness.

Some analysts thought Russia come July would be filling many of the markets to which Australia has been shipping wheat since harvest.

Without some realignment of Australian and world prices, buyers will be very active pricing Australian wheat and barley July through to October instead of that demand moving to Russia.

Input prices got cheaper during March and many took that as a cue to extend current season cover. 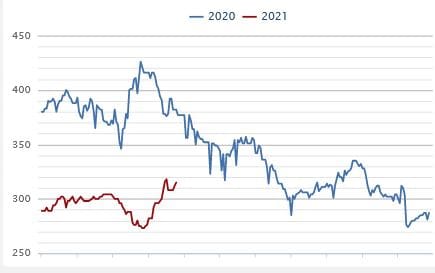 “People are trying to buy July today at evens to May. It wasn’t that long ago it was $5/t under. I think it will move to a premium if we don’t see some weakness in offshore markets,” Mr Kelso said.

Queensland and northern NSW feedlots have been active.

“The Downs market has firmed which is partly a function of feedlot demand, buyers favouring cheaper barley over sorghum, and having to come further down in New South Wales to buy barley.

“Barley priced at $60/t under wheat in the south is going to buy barley into everyone’s ration.

“If buyers know where the margin is for processing grain into meat they can make a conscious decision to lock it in.”

Rain this past week in the NSW north west has dramatically brightened prospects for that state’s crop production.

“Most people in the north west have good moisture profiles after such a great summer,” AgVantage Commodities’ Steve Dalton said.

“Soils were getting a little dry on top and the additional 10-20 millimetres we just received in the north west to plant into is ideal.

“Crops are going in on time.

“It shows conditions are good and people are optimistic. Some of the larger farmers have been willing to go early because they have a lot of ground to cover.

“It is looking like more canola will be planted this year in favour of faba beans, probably about 10/15 per cent more chickpea area and wheat area will remain strong.”

Trucks and logistics are still a major problem as the issue just won’t lie down.

Grain Central saw trucks over past weeks from Brisbane heading west away from the port. Those are the sorghum carriers who couldn’t get unloaded.

But the trade says the problem is much more widespread than Brisbane.

“Fewer trucks are available and there’s so much being moved around the roads at the moment,” Mr Dalton said.

“I don’t think it was any surprise that logistics would be tighter now than during the dry years, but what’s magnifying the problem is just the amount of grain that has to go to port for export, and quality issues.

“Uncertainty at discharge is costly and time-consuming, particularly for trucks travelling long distance to port.

“When growers have loads rejected to weevils or there are mice problems, they are trying to take action to shorten their freight time.

“There’s more wheat being delivered into Narrabri rather than travelling to the Downs.

“Sorghum is being delivered into Graincorp Narrabri instead of Brisbane.

“It has put a bit more grain into growers’ local receival points.

“Our logistics capacity seems to have tightened at the very time that we probably needed to expand it.

“There are major logistics bottlenecks getting grain to ports by road and rail up and down the entire east coast,” he said.

“Grain can’t get into the ports quickly enough. We could sell more cargoes tomorrow if we could physically get the grain there.

“It’s been an issue all year but has definitely blown up in the past 30 days.”

There are several positives for the feedlot sector.

“First, there’s grain available, second, we can get access to it and, third, it’s a lot cheaper than during the drought,” feedlot nutritionist Dr Rob Lawrence said.

Cost of gain in the cattle feedlot sector is a very different beast today compared with what it was 18 months ago.

“Our cost of gain now is relatively small compared to the purchase price of the live animal.

“The feed component is generating profit for the feedlot as opposed to during the drought when the high cost of feed meant breakeven or money lost.”

The other factor which has turned positive for cattle feeding is the latent potential of cottonseed down the track to provide better-value energy in the ration.

“People dropped cottonseed out of ration when it went through $700 to $850/t, but now the massive drop in whole cottonseed price has lifted it from 4-6pc of ration straight back up to 10-12pc and where they’ve switched from their normal wheat ration to barley, the energy difference lost by changing to barley in now not so significant.”

This season cottonseed is half the price of last year’s peak. There’s a better outlook for security of supply of whole cottonseed after the flooding of the western rivers has allowed major irrigators to harvest water.

Compared with other oilseeds on the world stage cottonseed is cheap.

Export demand is supporting values, however there is not significant volume to China.

Domestic demand would be tapered by lower feedlot numbers.

“On account of grower selling of seed generally being behind what would be typically sold by this time, in the southern NSW Riverina region ex gin values were a $20/t premium to northern values.”

Cottonseed this week for delivery gin spread was offered $385-390/t del Downs. The DCT market was about $445/t.

The cotton crop this year is expected to produce above 2.7 million bales, compared with about 0.6 last year. Extensive water available for irrigation in NSW is seen likely to produce a crop over 4 million bales in 2022.