NEW-CROP wheat and barley from Western Australia has started to trade into Brisbane to reflect the reality of the poor winter-crop outlook for most of southern Queensland and northern New South Wales. 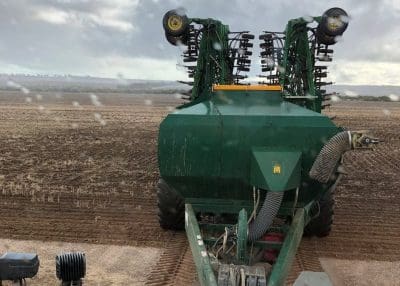 WA growers have finished planting their winter crop, and once again look like they will be supplying grain to Queensland feedlots. Photo: Scott Morgan, Minginew

Trade sources report this has sparked interest from feedlots spread from the Western Downs of southern Queensland to the far north of NSW in pricing grain out of the free-on-truck Brisbane market in January.

“We’re seeing feedlots well covered for now, and some are stepping in and getting cover for new-crop priced on transhipment from WA,” Emerald Toowoomba-based grain trader Doug Murphy said.

WA grain has continued to supply end-use requirements in southern Queensland and northern NSW, and Mr Murphy said the likelihood that this would continue into 2020 has clamped the market’s eye on WA’s growing season.

“In the new-crop market, wheat has softened maybe $10 a tonne on WA rain, and on lower US futures.”

Some late planting of cereals has taken place on the Downs for those growers lucky enough to get 25 millimetres or more in the past two weeks.

“The Downs has had some planting activity for those growers that jagged an inch or two, and around Condamine, there are some crops that got off to a good start.

“In northern NSW, it’s still largely dry and needing rain, and grain is going to have to keep coming around from the west and on to the Downs.”

Carpendale Commodities and Transport manager in Toowoomba Andrew Jurgs said after a firm start to the week, the inverse between nearby and new-crop prices had widened.

While prices in Queensland had begun the week firmer, current and new-crop diverged mid-week on the better rain forecast prevailing in WA, with January forward values dipping around $10/t while nearby mostly held.

“Interstate shipments will continue for as long as the delivered markets in Queensland remain the economic option for exporters from WA.”

In the South Australian market, Rural Directions agribusiness consultant James Hillcoat said wheat was trading for prompt delivery to Adelaide end-users at around $330 per tonne, and barley has been changing hands at $313/t.

In the new-crop Adelaide market, barley has been trading at around $300/t in limited volume.

“We’re not seeing too many forward bids.

“Liquidity did start to pick up, but rain in WA took the sting out of the market, and activity has slowed down.”

“There’s no stored moisture in a lot of areas. They need to have another rainfall under their belts.

“Growers are looking at tight stocks, and remembering (last year’s) wash-outs, and that rally in pricing that caught them off guard.”

Grower and trade selling is trying to pick the peaks in the market, and these are largely being created by concerns about lack of rain in WA as well as South Australia and eastern states.

“If sellers missed the harvest peak, they’re now in a clawback phase.”

Mr Hillcoat said yield prospects for the winter crop across Australia would be better known in the next month, but the market was likely to retain a domestic rather than global focus.

“Every cent lower is $3-$4/t more to our price, so while international markets have firmed, Australia’s price from a US dollar perspective hasn’t changed, and we’re getting closer to engaging with that global market.”

In Victoria, crops have generally been planted on time, and are in good condition, although parts of the state’s north-west are in need of rain.

“Seasonal conditions are looking pretty good, and we’re not hearing of too many issues out there.”

“There’s a bit of inquiry, but things aren’t massively busy on new-crop.”

This may alter in the coming weeks, which will help to determine yield prospects for crops in the southern half of NSW.

If conditions deteriorate, Victoria will once again play a crucial role in supplying grain to central and southern NSW.

“The supply chain’s worked out for that drag north.”

Sorghum this week remained thinly traded and a wide price spread to wheat, quoted around $70/t under.

Growers are reasonably well sold on their sorghum, there are no export ships and very little beef demand.

Demand overall is lacklustre and traded volume is thin, but some buying is seen from the likes of the poultry sector and Dalby Bio-refinery, especially where discounted number 2 grade sorghum would be available to suit the latter.

At the close of business on Wednesday 19 June its price settled at $338/t and open interest was 9472 lots, around 100 lots more than the previous week.