THE MARKET for feedgrain delivered to Darling Downs end users has dropped by $5-10 per tonne in the past week, but values in southern New South Wales have held steady as frosts limit crop growth and kick along demand for supplementary feed. 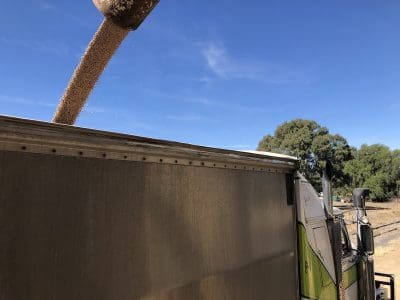 In the north, the relative security of feedgrain supplies sea-freighted from southern Australian ports to Brisbane has given major users opportunity to cover much of their exposure for several months ahead, one trader said, and prompted a correction off market highs.

Trade-to-trade wheat business delivered Darling Downs hit a top price in the first 10 days of July of around A$412/t.

Barley has also come off the boil, and lost some of its premium to wheat.

“Queensland barley users have either dropped it altogether, or reduced it to a bare minimum in their ration formulation.”

As with wheat, traders said the barley market has stalled, and barley values have this week come into parity with wheat in the Queensland delivered market.

Some expect this drop-off in demand will reinstate its usual price position to wheat, which is a small discount.

Sorghum trade was seen as virtually inactive over the week, nominally lower as the price of white grains has weakened, and quoted at about $365-360/t delivered.

Cottonseed prices have also steadied, now that gins have caught up with the spike in demand that swamped them at start-up.

New-crop wheat delivered Darling Downs January 2019 plus carry was quoted this week in the low-to-mid $380s per tonne, with light rain in southern Queensland in the past two weeks encouraging some forward selling.

Intermittent buying from graziers, and demand from poultry producers and the container market has removed any downside from southern values, despite recent rain.

“With showers here and there, our crops are just hanging on in terms of moisture, and we’re starting to get a few frosts, which is really limiting growth,” QPL Rural principal, Craig Pellow, Temora, said.

“We’d love to see 50 millimetres of rain here, and they need it more in central New South Wales.

“Go north of Parkes, and it’s a disaster.”

Barley for prompt delivery to the southern tablelands has traded at up to $380/t in the past week, with narrow-leafed lupins selling at $470-$500/t delivered.

“Growers are paying a premium for anything delivered direct to them, and the lupins that are trading are mostly neighbour-to-neighbour sales,” Ms Strong said.

“We’ve still got a number of growers looking for feed.”

Barley has continued to trade at a premium to wheat, and volume parcels sourced out of Victoria are changing hands within the trade and making their way to NSW.

“Those graziers are paying around $30/t over what the feedlots are paying for wheat, and no-one’s selling new-crop.

“The prices being offered are good — around $320/t for new-crop feedgrain — but growers are worried about production because they know they don’t have much moisture under their crops.”

“While we’re only getting five millimetres here are there, people aren’t going to be interested in forward selling.”

Ms Strong said most operators were still handfeeding stock, and expected to continue doing so until spring.

“We’ve had frosts and the crops aren’t growing, so when we get rain, it just translates to less demand for two weeks until people come back to the market.”

Melbourne is the key container port for grain and pulses shipped out of central Victoria and the southern slopes and adjacent plains of NSW, and its new-crop grain markets have risen in recent weeks.

“What is shows us is buyers need to come further south for grain, and it’s getting drier.”

Another trade source said this showed container packers had to pay up to keep grain away from the northern feed-driven markets in November and December.