GrainCorp’s Thallon site in south-west Queensland received more than 290,000t of grain in the 2020-21 harvest, and the last of it was sent to the Port of Brisbane this week in time for the site to be cleared ahead of new crop. Photo: Nathan Holmes

UNFLAGGING export demand for wheat has lifted current-crop and new-crop values this week, while barley has traded mostly steady on subdued demand from feedlotters.

Extremely competitive basis for Australian wheat in comparison to Black Sea, Europe and North American origins is driving the demand.

The existence of a big wheat carry-out in New South Wales is now being reassessed as a blessing rather than a curse for new-crop values, as its high protein profile can be used by traders to blend with what is expected to be a softer crop this harvest.

On the production front, southern Australia could do with a week of dry weather to allow growers to catch up on weed and fungicide spraying, and spread urea in time for crops’ spring growth surge.

Southern Queensland and northern NSW have had an unusually wet winter which has curbed the appetites of cattle on feed.

Smithfield Cattle Co commodity buyer Brett Carsburg said this, and uncertainty about cattle prices and offshore beef demand in light of COVID and other factors, had limited feedlots demand.

“I think the majority of feedlots are covered due to cattle numbers being lower during winter, and consumption being less in the wet and cold conditions,” Mr Carsburg said.

While wheat in the northern market for prompt delivery has firmed by at least $5/tonne in the past week, nearby barley values have stayed put.

“Wheat is firming slightly on the back of the US wheat spring yields, and barley is trading sideways, but it could be dragged up by wheat.”

Barley’s discount to wheat has kept it as the preferred grain for feedlots, and it is still factoring into poultry, pig and pellet mixes.

“The Queensland-NSW border region has run out of barley, and the drawing arc has dropped into southern NSW.”

Mr Carsburg said the wet winter would mean bountiful pastures once the weather warmed up, and the impact of that on feeder cattle prices was limiting feedlot interest in extending coverage.

“Coming into summer, grass is going to be everywhere.”

Most of northern NSW and southern Queensland has had its driest week since early June, and this has enabled consumers to catch up on deliveries booked earlier.

“Barley’s been a bit lacklustre, and that’s probably the result of less export movements.”

“We’re starting to see the grower engage because cash prices have snuck up.”

Mr Stroud said most growers seemed to be behind where they normally were on forward selling new-crop wheat and barley because their crops got off to a slow start.

“Up to May, things were pretty dry, and the crops that went in dry are going okay, but the ones that waited for the break are a bit behind, even though June and July have been good months in terms of rainfall.

“For consumers, there’s a bit of forward cover taken into September, and a few have priced into October.” 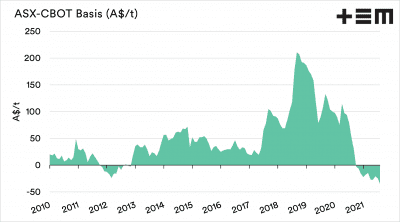 “I think that’s where asset owners are seeing better margins.”

As south-eastern Australia’s terminal and major storage operators schedule exports for the closing months of the current shipping year, Port Adelaide appears to be pulling large amounts of grain out of the Victorian Mallee.