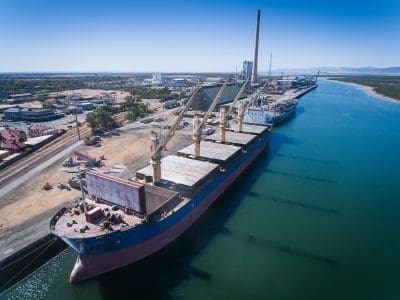 ADM loads barley and wheat on to the Super Lydia, its first vessel out of Port Pirie, which discharged in Brisbane last week. Photo: Lindall White, White Photography

This article contains updated prices for Brisbane wheat and barley

INCREASED competition for wheat and barley being harvested in Victoria’s southern Mallee and Wimmera districts has lifted prices by at least $5 per tonne in the past week.

The grain is being booked by the trade to offer out of railheads in central and northern New South Wales, and direct to consumers in Victoria and southern NSW.

While big tonnages of barley and wheat are being harvested in Victoria and south-east South Australia, trade sources have said growers appeared to be reluctant sellers.

“We’ve seen prices climb since we started harvest, and barley and wheat are both up a couple of dollars just this morning,” Shannon Bros Horsham site manager Clayton Shannon said.

“The market for the stuff the trade is looking to send north is really strong, and it looks like it will be going on a train.”

Wheat with higher protein is attracting the strongest competition from traders looking to supply flour-millers and feedgrain users looking for high-spec inputs.

Considerable amounts of barley and wheat are being warehoused in Mallee and Wimmera storages, and few growers are parting with barley at less than $270/t and $315/t for APW wheat.

New-crop grain has started to arrive in Brisbane and barley is being offered in the free-on-truck (FOT) market at $360-$365/t for January and around $380/t for December.

Wheat Brisbane FOT January was available at $435/t while December was quoted $440/t.

The Brisbane FOT market is expected to keep supplying north-eastern NSW and southern Queensland, with feedlots on the Darlings Downs the biggest consumer.

Current numbers are showing the Brisbane FOT market to be a few dollars cheaper into northern New England end-users than grain road-freighted north from Victoria, but this may change once new-crop vessels start to come into Newcastle.

Norco commodity trader Simon McDougall said the 2020 market in northern NSW was expected to bring “solid engagement” from traders offering out of the Brisbane and Newcastle FOT markets, and railheads at Narrabri and Parkes.

“The November-December markets have been all about what’s available off the header in southern NSW and Victoria, and there’s been a bit of a pause in activity at the ports.

“The crop this year is more aligned to coming by rail out of Victoria, and not so much from WA.”

This is a function of the much larger crop in Victoria compared with last year, and a smaller WA crop which is registering unusually high proteins, and attracting improved offshore interest.

“It shows the industry is getting more efficient at moving interstate grain up-country, and that 800-1000 kilometres on a train and 400km on a truck is more cost-effective than 1200km or more on a truck.”

ADM is now out-turning South Australian barley and wheat it discharged in Brisbane last week on the first vessel it loaded with grain accumulated at Port Pirie.

It is an early indicator that SA and Victorian rather than WA grain will play a much bigger part in supplying NSW and Queensland needs than they did in old-crop slots.

According to Lachstock Consulting’s latest transshipment summary, eight out of 10 vessels discharged in Brisbane in the month to Christmas Day are from SA, with only two vessels from WA.

New-crop sorghum is usually trading in considerable volume at this time of year, but the continuing lack of planting rain has turned the market into a nominal one which is trading at a premium of at least $30/t to wheat.

This is at odds with normal pricing, with discounts of around $50/t to wheat.

“Sorghum can get sown up to Australia Day, but the crop can run into problems if it’s late and, because the profile is completely dry, it’s really looking like it’s too late for sorghum this year.”

The red grain has some inelastic feed demand, largely from the pig and poultry sectors, which is supporting prices for sorghum grown in Central Queensland.

Grain prices are 10-20 per cent below where they were last year, and growers do not appear to want to put any more supply-side pressure on them.

“Through harvest, we have seen the market weaken, but it’s trying to grind higher now.

“While the margins are good in domestic feeding, the demand will stay there.”

ASX wheat and barley futures settled higher on Wednesday, having traded both sides of par during the week.

The ASX feed barley (UB) January 2020 contract traded in a $9/t range this week, the low occurring last Friday at $276/t and Wednesday’s price was the high, at $285/t. On 220 lots trade volume, open interest fluctuated to end the week lower than previous week.

“Potential supply of new crop only appears to be getting smaller at the moment.”

Spot trades for December pickup were small in volume and prices practically static.

Cottonseed yards usually shut for an extended Christmas break, so the message is to organise logistics allowing plenty of time.