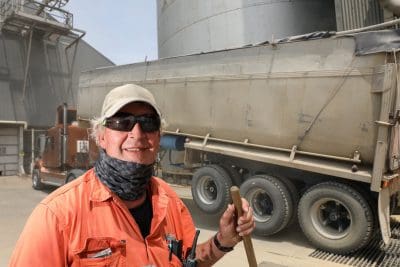 Grain from the most recent harvest is in hot demand from export and domestic customers as Australia’s supply chain continues to function largely unhindered by COVID-19 restrictions now in effect across the country. Photo: GrainCorp Murtoa

PRICES have risen in the past week as buyers for export compete with domestic consumers on shrinking stocks of unsold 2019/20 barley and wheat.

The new-crop sorghum market in Queensland has also risen, and is trading in limited volume.

Fuelling the price rise has been the Australian dollar’s dip below US$0.60, which has made free-on-board offers ex Australia wheat and barley attractive to overseas customers.

Logistics are also playing a part in making Australian grain for shipment in coming months attractive.

While grain movements around the globe are largely exempt from COVID-19 lockdowns, importers including China appear to be looking to countries including Australia to book grain.

It comes as part of the global market’s wariness about relying too heavily on tonnage from zones including Europe where the impact of the virus could interrupt supply chains.

In the domestic market, transshipments of grain into Brisbane and Newcastle from South Australia and Western Australia are continuing around COVID-19 restrictions, and trains and trucks carrying grain are able to cross borders and get to consumers.

However, domestic customers are looking to extend coverage and ensure input supplies for the next few months in case COVID-19 disrupts their supply chain.

“There’s certainly been a lot of nearby demand with a lot of industries stockpiling or going hard on their manufacturing.”

Mr Lewis said a quiet period could be expected to follow the flurry of buying now being seen from domestic and export customers.

“It’s busy now, but it will get quiet in the third quarter in Australia.

“China will be chewing through its stock, and we’ve front-loaded a lot of our demand here too.”

Retail in Australia has seen a massive upswing in demand for items including bread, which has flowed through to bakers and millers.

While this will not affect the amount of wheat Australia uses in the current crop year, it has prompted millers to call forward deliveries of wheat from growers they have already booked.

The spread between wheat and barley has widened to $75-$90/t in southern markets to indicate a recent run of farmer-to-trader and trader-to-trader wheat sales.

“A lot of it has been driven by wheat.

“Our general view is wheat is the tighter of the two complexes.”

In the new-crop market, wheat delivered Melbourne is trading at around $360/t to reflect the trade’s expectation of a big crop in eastern Australia.

The new-crop Melbourne barley price is roughly in line with the prompt price.

Alliance Grain principal Luke Walker said price rises in the southern Queensland market indicated export was now competing with domestic, and customers around the globe were keen to build stocks for fear of what COVID-19 might do to supply chains.

“We’ve all been that focused on domestic, and now it’s back to export.

“Countries want to build their stockpiles, and everyone wants to own grain.

“Coronavirus is really driving this market.”

The small sorghum crop on the Liverpool Plains of northern NSW is already being harvested, and will be consumed domestically.

In southern Queensland, many sorghum crops are in head and harvest will start next month.

However, the crop is small, and is likely to be consumed within the region by feedmills supplying poultry farms and piggeries.

Harvest of the later-planted and much bigger Central Queensland (CQ) crop will take place mostly in June and July, and is expected to be absorbed by stockfeed millers from the Brisbane region to North Queensland to the NSW border.

Trade sources estimate less than 10 per cent of the CQ crop, which is seen at 300,000t, has been forward sold by growers.

“We are entering a critical flowering stage of the CQ sorghum crop soon, and more rainfall would be welcome to firm up yield prospects,” he said.

“Growers will be cautious till we see crop further advanced.

“It’s highly unlikely we will see any bulk exports from Mackay or Gladstone at this stage with the crop size across Queensland as a whole not supporting this pathway.”

Wheat activity dominated ASX grain futures amid higher prices.  Volume of wheat contracts traded was up this week to 3113 lots, compared with 1372 lots the previous week. Open interest rose in current crop May 2020 through new crop January 2021 and the red crop January 2022 contract.

Barley activity was light, 149 lots traded, and price rises reflected less than half those of wheat. New crop barley settlement price peaked on Tuesday, at $310 and it settled yesterday $15/t lower at 295/t.  The barley wheat price differential on Wednesday’s settlements was $85/t in May 2020 and $63/t in the January 2021 contract. Barley open interest was little changed from a week ago.