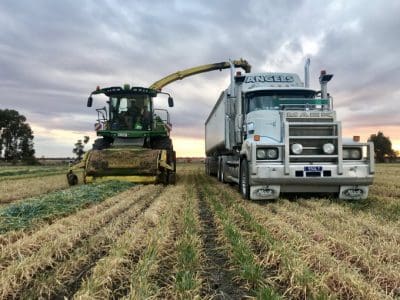 A barley crop at Jandowae is cut for silage for sale to a feedlot.

EASTERN Australian feedgrain values traded flat to firmer in the past week with the exception of the northern prompt market, where short covering from some feedlots lifted wheat and barley values by $10 per tonne.

The jump has been caused by many crops on the Darling Downs being cut for silage or hay and sold into feedlots, which has tightened the supply of southern Queensland grain.

Harvest of barley and wheat crops in Central Queensland (CQ) is now in its final third, and is getting under way in the Maranoa and Western Downs, but volume is so small it has failed to exert any supply-side pressure on values.

“With the harvest in CQ, some growers ran into green grain early on, which has slowed things up by a couple of weeks, and made supplies tight,” Mr Parry said.

“There’s quite a lot of interest from end-users who are consistently buying hand-to-mouth.”

Trade sources told Grain Central large feedlots were believed to be covered for grain up to January, but smaller operations are in the market for WA boat wheat and Queensland grain for delivery to December.

The delivered Darling Downs 2019 markets have risen $5-10/t per week over the past fortnight; both wheat and barley for 2019 delivery October/November/December even spread quoted at $440/t.

Barely a drop of rain has fallen in drought-hit areas in graingrowing areas of southern Queensland and northern New South Wales in the past week, which has encouraged growers with struggling crops to cut rather than harvest them.

While south-eastern Australia has had some good falls in the past week, they were confined to coastal and mountainous regions, and only a few millimetres at best has fallen in key cropping areas.

Mr Parry said graziers in the New England region of northern NSW, as well as feedlots, were bidding for bales.

“A lot of crops around Moree and Narrabri have run out of moisture, and they’re putting up heads which are not going to yield much.”

“At $450/t ex farm, there’s money in them as hay if they’re cut now at the milky dough stage, which is the ideal time.”

Mr Parry said some crops on the plains and outer slopes of central and southern NSW were meeting a similar fate as their grain-yield prospects slipped away.

“From Cowra south it’s too early and too cold to make hay, so some of those crops are being cut for silage.”

However, some crops on the southern and inner south-west slopes and eastern Riverina of NSW, and north-west Victoria, and around Gunnedah, are hanging on to average grain-yield prospects, but are in need of rain in the next fortnight to preserve them.

“A lot of growers are hoping for a bit more rain to get to the finish line.”

A dry start to spring has re-ignited grazier demand for barley as well as cottonseed on the inner slopes and tablelands of NSW, and this has made barley a few dollars dearer than wheat in current-crop and new-crop markets.

At Finley in the NSW Riverina, Kelly Grains trader Matt Kelly said the lack of a crop-finishing rain, and zero water allocation, meant even some irrigated crops were being cut for hay.

“We’ve seen quite a lot of canola get cut for hay, and sheep are starting to go in on barley crops.

“A lot of crops are being cut for hay for local consumption, or cut for silage.”

Mr Kelly said perhaps 30 per cent of the region’s crops lacked even the biomass to be cut for hay, and the grain potential to warrant harvesting.

Trade sources have said the market has been aware for some weeks that many central and western Riverina and Northern Mallee crops were on a knife-edge, and have factored the reduced grain supply into their buying.

“But if you go 100 kilometres south of us into Victoria, the crops are looking really good, and the market’s expecting that grain to come on tap around harvest.”

This has kept the new-crop delivered Hanwood-Griffith market at around $375-$380/t, largely unchanged from last week.

In the Finley and Deniliquin districts and in most of Victoria, that is unlikely to be before December.

“We don’t see Victorian growers engaging in the forward market, and we do see their grain coming north to supply NSW.”

“Everyone is buying hand to mouth.”

Mr Kelly said many crops in north-west Victoria and south-west NSW were in need of rain in the next 10 days to hold on to yield prospects.

“The AFL grand final weekend will be the make or break, especially seeing as we’ve got daytime temperatures of 26 degrees forecast for the end of the week.”

Current-crop barley is in limited supply, and new-crop interest puts it at a $40-$50/t discount to wheat.

The ASX eastern wheat (WM) market fell $15/t on rain forecast before last weekend and lifted during this week by almost the same. A similar pattern in barley saw the (UB) price dip and recover about $10 over the week.

Cottonseed prices continued to gap higher as dry weather shaped the risk premiums built into the nearby and forward market.

“Values now will encourage substitutes and consumers will need to look at options given the water situation and how it’s affecting prices for cottonseed.”