THE southward march of crops being cut for hay has lifted grain prices in the Riverina market this week as end-users look to cover their requirements into January when interstate grain is expected to become the staple supplier for large-scale end-users. 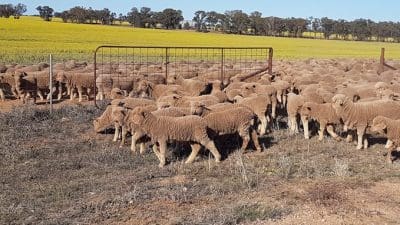 Canola as well as cereals is being fed to stock or cut for hay. Photo: Peter Unger, Alectown

Griffith-based Grain Link trader Richard Gale said new-crop wheat delivered Riverina end-user had traded at $380 per tonne this week, up $10-$15/t over the past fortnight.

“It’s making it one of the strongest markets in Australia,” Mr Gale said.

The lift has switched the inverse between current-crop and new-crop, with the former trading at $375-$380/t to reflect some urgency in the opening weeks of the new-crop period about covering supply.

Beyond that, consumers are looking to South Australian, Victorian and Western Australian grain to supply the bulk of their needs.

“That supply chain from WA and SA, and from Victoria, works, so there’s no reason for anyone to get worried about a shortage of supply further out.”

Mr Gale said there was little difference between barley and wheat prices.

Frost, wind and heat have all taken their toll on yield prospects for canola and cereal crops in recent weeks in most districts of NSW outside the south-west and southern slopes.

The grain they produce is expected to go into feed and flour mills from Sydney south.

Many farmers in affected areas have opened the gate to stock, or decided to cut crops for hay.

They are, however, being careful not to flood the market, as new-season hay prices in southern markets have weakened under supply-side pressure.

Swan Hill-based hay contractor Coby Pearce said the season had gotten off to an early and frantic start, which had him looking for workers to cover the upswing in demand for services.

“We’re going as far north as Narrandera, and we are doing crops that are literally dying or have gotten frosted and won’t fill,” Mr Pearce said. 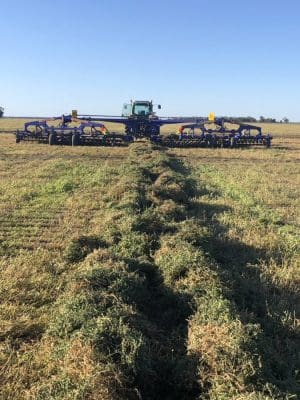 “There’s a lot of hay getting cut by farmers for sale, but the guys that normally do export hay are being careful not to put too much on the market now.

“Hay is at 50 per cent of its price this time last year, and they don’t want it to get lower.”

South of the river Murray, some grain crops are close to being cut for hay, with parts of the northern Mallee the hardest hit.

“The dry will certainly bring more hay onto the market,” Mr Duxson said.

“There’s plenty of it going into feedlots, and the farmer-to-farmer market, and also into Gippsland.”

Current-crop hay is still trading the inverse, at $50-$100/t over new-crop values.

“A lot of crops aren’t in ear yet, and they won’t be cut before they are.

“The Riverina is basically on a knife-edge, and the northern Mallee is too.”

The biomass in failed crops is relatively small compared with a commercial hay crop, and while a large area is being cut by farmers, fodder yields are low.

On the outer slopes and plains of NSW, including the Forbes and Parkes districts, some crops lack the biomass to cover the cost of haymaking, and are being used to feed stock.

On the plus side for grain supply, crops in the Wimmera, Southern Mallee and south-east SA have mostly above-average yield prospects.

Solid demand from feedlots on the Darling and Western Downs, and in the Maranoa, has seen the prompt delivered market for Central Queensland (CQ) grain chug along at around $415-$420/t delivered.

WA boat wheat ex Brisbane is trading at around $400/t delivered Downs, with its discount to CQ wheat largely due to its lower protein.

The small amount from the southern Queensland harvest is also being booked up by feedlots, which are keen to extend coverage into January, when new-crop wheat from WA will hit the Brisbane free-on-truck (FOT) market.

The ASX eastern wheat (UM) and barley (UB) futures market traded smaller volumes this week but at prices which lifted 4 per cent (pc) and 2pc respectively, on top of the previous week’s 5pc and 7pc rises.

The ASX feed barley (UB) January 2020 contract traded 298 lots during the week and the settlement price has firmed daily for almost three weeks.

Cottonseed nominal prices this week are up by another $30/t in the south and $10/t in the north.

“Demand is still there for small tonnages and stocks are limited, so prices are higher but the volumes trading are light,” Woodside Commodities manager Hamish Steele-Park said.

Asking prices in the Moree region this week for nearby pickup were over $630/t free on truck, and in the MIA in southern NSW were over $590/t.

“Weather conditions for next year’s cotton crop have deteriorated from bad to worse, and estimates of the size of next year’s crop keep getting revised lower.”

ABARES last week forecast Queensland’s cotton crop this summer would be cut by half and produce around 122,000t of cottonseed, mostly irrigated.

The NSW outlook is worse; retained soil moisture is close to zero, supplies of irrigation water are very low and it would take a significant rainfall event for the summer-crop outlook in NSW to improve, according to ABARES.

The NSW cotton crop is forecast to produce 249,000t of cottonseed.

Australia’s total cottonseed supply in 2020, production plus carryover stock, is likely to be about 400,000t.

Even in the absence of overseas buyers China and US in recent years, Australia’s total cottonseed production and consumption in the past six years has averaged about 900,000t.

The small crop this year will come on top of two years of low output, and this looming shortfall is pushing buyers to find value in alternatives.