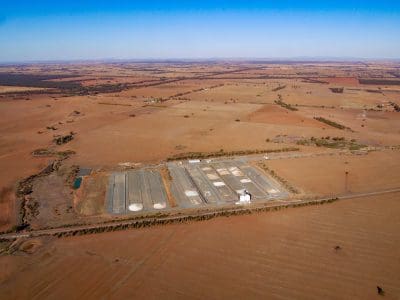 Bunkers at sites like this Grainflow one at West Wyalong are normally close to full after harvest. The lack of grain reflects the low yields from a tough season, and how little grain made it into the NSW bulk handling system. Photo: Farmer from Down Under

A SHIPPING stem which features Western Australian grain arriving at every port from Geelong to Brisbane, and weakened world prices, have allowed feedgrain values to drift lower this week, despite yield prospects for the sorghum crop now being harvested fading with every passing day.

On Tuesday, ABARES released its estimate for the sorghum crop, with total Queensland and New South Wales production pegged at 1.3 million tonnes (Mt).

This is down from around 2.2Mt seen, or hoped for, when planting got under way in earnest in October, and before a brutally hot and dry January and early February bit into yield prospects.

Some growers on Queensland’s Darling Downs, Australia’s main sorghum-producing area, are now busy harvesting crops prematurely, despite the grain moisture being up to 16 or 18 per cent, above the maximum for SGM1 at 13.5pc.

“It doesn’t look like the growing areas are going to get any useful rain out of Tropical Cyclone Oma, and the concern for us now is the wind it might generate,” Emerald Grain northern region manager Brad Weier said.

The Bureau of Meteorology is forecasting winds of up to 40 kilometres/hour for the Darling Downs over the coming days.

Most unharvested sorghum crops are weak, and in danger of lodging, and the best of them are likely to yield three tonnes per hectare.

High screenings and low testweights are likely to push some of the grain now being harvested into SGM2 and SGM3 categories.

“They might normally be 30pc sold going into harvest, but it’s more like 50pc this year because their production is lower than what they expected earlier in the season,” Mr Merson said.

A steady supply of feedgrain from WA coming into Geelong and Melbourne as well as Brisbane, Newcastle and Port Kembla has prevented prices from climbing.

The latest vessel is now loading wheat in Geraldton bound for Melbourne, and is expected to bring the amount of grain shipped from WA to Victoria since December to around 100,000t of mostly feed or ASW-type wheat with some lupins.

Traders believe growers are holding reasonable amounts of grain on farm in Victoria and southern NSW, but are reluctant to sell it now as they see only upside in higher prices, and want to retain it in case they need it to feed livestock in coming months.

Sorghum prices have eased by around $3/t this week, and wheat prices have also softened, with WA grain now available free-on-truck from Brisbane at the weaker world price, and not with a drought premium.

WA growers are believed to have sold around 90-95pc of their current crop, which has created some long positions the trade is keen to quit.

With China now processing submissions into its anti-dumping investigation of Australian barley pricing, Australia’s biggest barley customer is said to be out of the market for now.

US wheat futures fell 8pc over 4 consecutive days this past week, further softening the near-term price outlook for grain.

In southern Queensland, the barley market has traded today in limited volume at $388/t for March delivery Darling Downs, compared with $362/t for sorghum, and $427/t for wheat.

Lower wheat values have narrowed its spread to barley, which blew out to $55/t when wheat was in short supply early last month.