COMPETING opinions as to when harvest pressure will kill the inverse between current and new-crop prices have kicked up prices in a thin market this week. 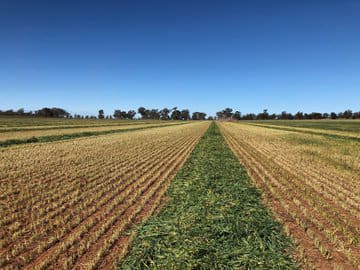 A number of crops like this one at Berrigan are being cut for hay in southern NSW.

While consumers are poised to book tonnages for November and December at new-crop prices, it seems the trade is hanging on to hopes of getting prompt values for shipped grain in or on its way to Brisbane.

The harvest of crops in southern Queensland northern New South Wales has gotten under way in earnest in the past week, and was disrupted by hail and downpours in pockets of the northern and western Darling Downs on Tuesday.

Many crops with reasonable biomass have already been cut for hay to sell into the lucrative fodder market, and growers will be putting the header into lighter crops.

Mr Dalton said some offers for December where softening in an attempt to attract bids ahead of the rise in supply-side pressure in January.

While harvest is two to four weeks away for most NSW crops, and for barley in north-west Victoria, the cutting of crops for hay continues, and is tightening local supplies of grain.

“Feedlots are waiting for roughage to get cheaper.

“If they want straw, not higher-protein hay, it’s going to be the least available commodity, because most people are baling hay.”

“There’s two-thirds of nothing on the Darling Downs.”

Mr Pengelly said the market for sorghum for prompt delivery had climbed $5-$6/t in the past week, and was trading at more than $400/t.

“It’s a pretty hot market, and it’s all starting to get very short.”

“That’s the difficulty of trading at this point of time; no-one wants to be long.

“The inverse normally closes with harvest pressure, which is October, but this year it’s really non-existent.”

“It’s really going to be a factor of when importers of interstate grain decide to sell old-crop as new-crop.

“They’re trying to hold prices up as long as they can.”

With domestic values keeping Australian grain prices well above export parity, trading companies are expected to push a considerable tonnage east into the domestic market at the first available opportunity.

In the prompt wheat market, at $430-$440/t delivered Downs, supplies are being sourced ex-farm Central Queensland and/or from the fot Brisbane market.

In southern markets, volume traded for current-crop and new-crop slots has also been thin, with trade sources reporting growers do not want to advance their forward sales program until they have a better handle on their yield prospects.

Crops south of south of Sea Lake in the Victorian Mallee are said to be looking good, with wheat quoted for prompt delivery into Geelong and Melbourne at $375/t, and $10/t less for new-crop.

With current-crop barley at $345/t delivered Geelong and Melbourne, and $325/t for new-crop, the inverse on barley is bigger, largely because of its increased area this year.

ASX wheat and barley futures prices lifted 5-6 per cent this week, having fallen by a similar amount the previous week.

The eastern wheat (WM) January 2020 contract settled yesterday at $366/t.  The week high settlement was $369/t on Tuesday and the week low settlement was last Thursday at $352.50/t. The weekly volume traded was 1657 lots. Open interest on Wednesday was slightly lower at 12,315 lots.

“Last week appeared to be dominated by some profit taking on long positions in wheat.

“That was characterised by falling prices but static open interest, which in my book equates to existing longs selling to new entrants.

“The depth of bids each day has been extensive, indicating there are still plenty of willing buyers based on the existing weather threat. Offers have been sparse.

“Seasonally we usually see a high made in September but this year may be slightly different,” Mr White said.

“A good early start in Vic and WA is rapidly fading and so the production estimates that often get determined in the spring are under review.

“WA was hit by frost in early September which has been followed by hot, dry weather.

“The combination has done a lot of damage.

“Warm temperatures this week across the south of the country and no rain for several weeks is denting what were good crops in SA and Vic.